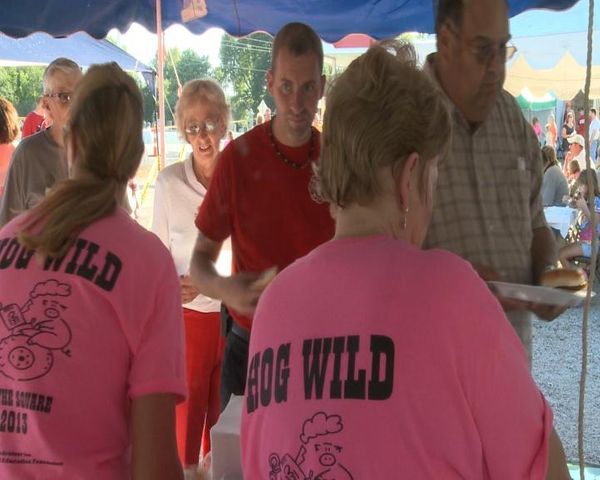 NEW BLOOMFIELD - Patrons of the 2nd Annual Hog Wild at the Square event in New Bloomfield helped themselves to barbecue pork, potato salad and a table-full of assorted desserts. Some purchased raffle tickets in hopes of winning half of the money collected, others paid to enter the washer contest to prove their skill with the tiny metal rings, and children begged their parents for just one more dollar for another shot at dunking school superintendent David Tramel in the dunking booth.

Each dollar spent would not travel very far. Just down Redwood Drive, you can see the sign, pointing your way there.

The event, run by the New Bloomfield Education Foundation, is the chief fundraiser for the non-profit organization, and helps supply the schools in the New Bloomfield School District with new technology, like scanners, projectors and a new series of textbooks for the elementary school. The Foundation started in 2011, when the school district underwent budget cuts, and froze teacher salary. Since then, it has raised $15,000 for the school district.

Hinrichs said she wants to raise money, awarded to the school district as grants, to update the computer labs, which haven't been upgraded in six years.

"There are a lot of things that we would like to do that we're not able to do yet," Hinrichs said. "But we have goals, and we have a vision for it, so it's just a matter of finding that pot of money now."