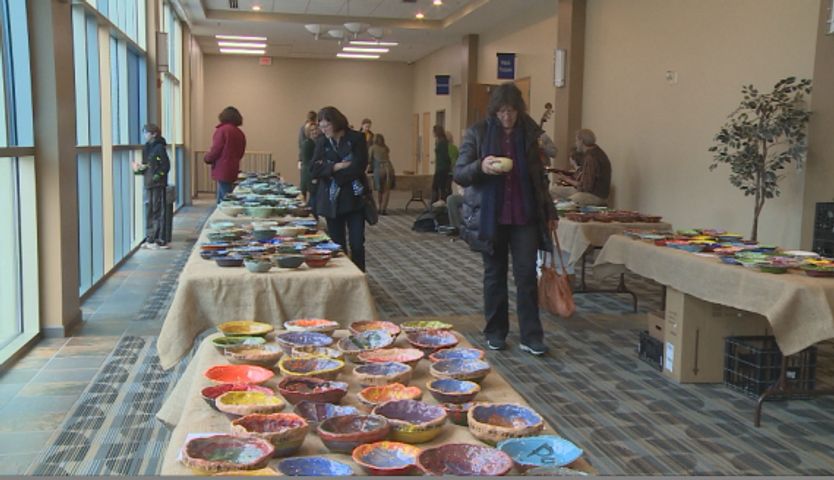 The event is designed to raise awareness for hunger and food scarcity, with donations collected being used to assist the center in planting rows of food that it will give to local pantries as a part of its "Planting for a Pantry" project.

"We want to make sure that everyone can access good food here in Columbia," said Billy Polansky, one of the event organizers. "The main purpose for urban farm is to grow food, which we bring to the food pantry."

Event-goers were served a "simple" meal of bread, water and soup at the free event. Polansky says the menu is intentionally basic.

"In effort to bring attention to hunger, we didn't want something over the top," Polansky said.

The event, which doubled as a fund raiser, sought out donations for the center's urban farm. Guest were encouraged to purchase "empty bowls," produced by members of the community throughout the month.

"The empty bowls at the event are sort of symbolism for hunger in our community," Polansky said. "It's sort of a way to signify people who maybe don't have food at every meal or who struggle to access food regularly."

Guest were also given the opportunity to sponsor the planting of produce that would eventually be given to local pantries. One attendee, Elizabeth Allamann, said the type of food the organization provides, is the reason why she's eager to donate.

"i think that being hungry is a huge detriment to health and well being in our community," Allamann said. "We can be hungry just because we don't have good food to eat even if we have plenty of calories."

The Columbia Center for Urban Agriculture donated 17-million pounds of food to local pantries last year. They hope to triple that number within the next five years.