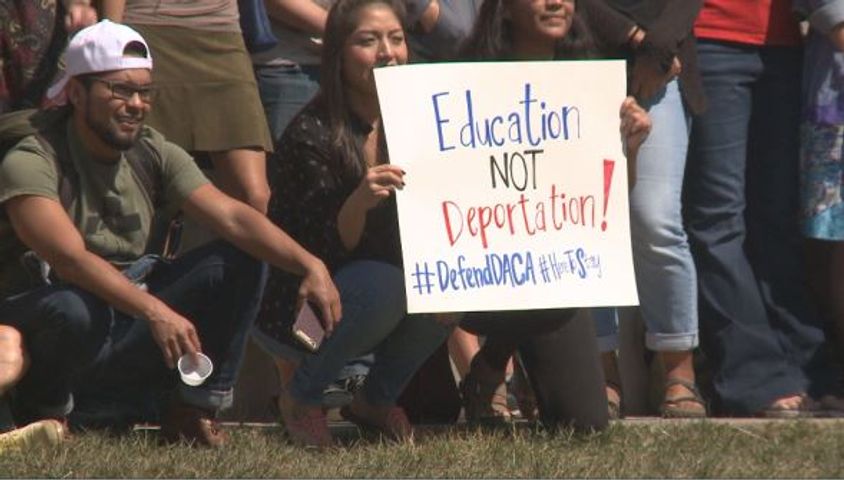 COLUMBIA - President Trump's decision to end the Deferred Action for Childhood Arrivals program, also known as DACA, has spurred conversation and calls for action in Columbia.

DACA, put into place by President Obama in 2012, allowed children who came here illegally to stay in the United States.

On Wednesday, multiple graduate student groups and MU students gathered in front of Jesse Hall on MU's campus for what they called a "solidarity photo" with people potentially affected by the decision.

Joseph Moore is the outreach officer for the Coalition of Graduate Workers, one of six groups who cosponsored the event.

But support for those affected by the ending of DACA didn't end there.

The event was also advertised as Call Congress Day. Organizers encouraged supporters to call their representatives and ask that they support the DREAM Act. According to the American Immigration Council, the DREAM Act creates a pathway to citizenship for undocumented youth.

"I think doing this is important because a lot of causes just end at protests but what we're doing is calling people to mobilize", said David Aguayo, a graduate student at MU.

Earlier this month, Attorney General Jeff Sessions announced the Trump administration will ask Congress to review the policy and have a solution in six months.

His statement read in part:

"To have a lawful system of immigration that serves the national interest, we cannot admit everyone who would like to come here. That is an open border policy and the American people have rightly rejected it.Therefore, the nation must set and enforce a limit on how many immigrants we admit each year and that means all can not be accepted. This does not mean they are bad people or that our nation disrespects or demeans them in any way. It means we are properly enforcing our laws as Congress has passed them."