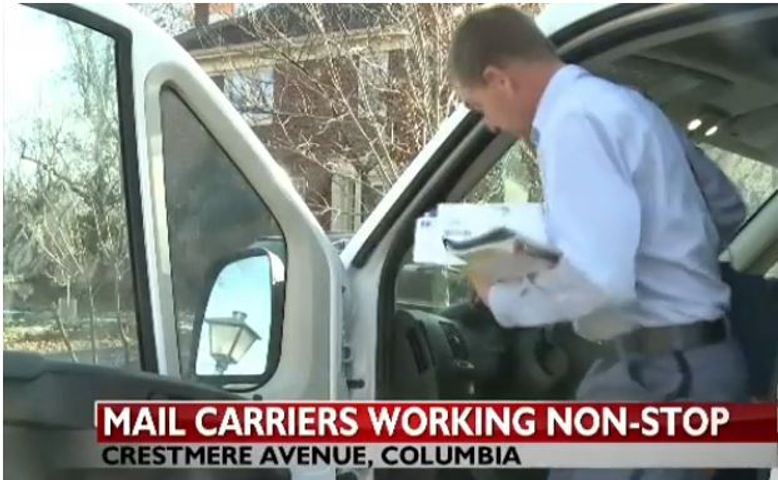 COLUMBIA - Often Santa gets all the credit for delivering presents by Christmas morning but each year the United States Postal Service is helping the Big Guy meet his big deadline.

This year is no different.

Connell has been a mail carrier with USPS for 32 years. His route covers the neighborhoods surrounding the Columbia Public Library. He delivered 200 packages on Thursday, Dec. 22, alone. Consistent workers like Connell help add order to the chaos. This is necessary because the post office in Columbia delivered about 400,000 packages since Thanksgiving.

Postmaster of Columbia, Mark Rask, said last year Columbia's post office did not have enough employees to meet the holiday demand but this year they have added workers. Although the added workers help lighten the load the holiday season has been non-stop for the local post office.

"It's pretty much around the clock with the amount and volume of packages we receive," Rask said. "So people are working, you know, making sure packages, cards and letters and everything are sorted, carriers are coming-in in the morning and making sure we had the extra help to get the parcels got all out there."

Rask said his letter carriers take their Santa duties seriously. But so do Columbians. During Connell's route Thursday he picked up a few presents of his own; fudge from one of his many customers.

Nationwide USPS estimates it will deliver 750 million packages by Christmas.