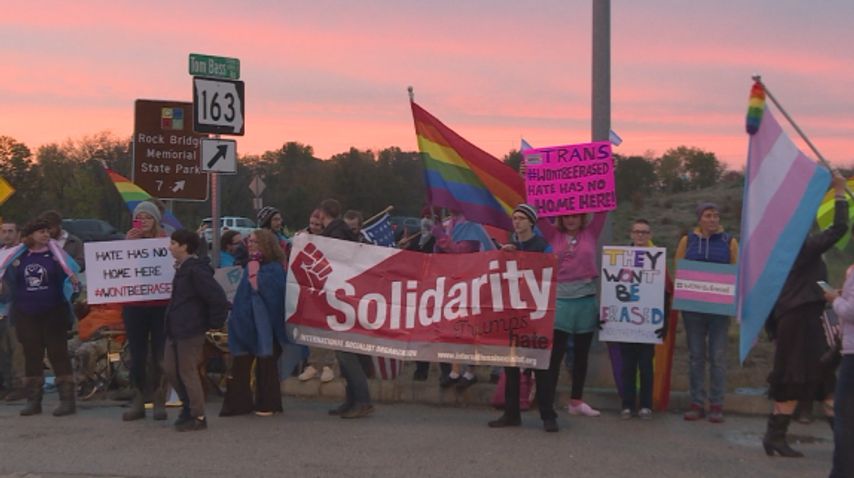 COLUMBIA - Thursday protestors gathered off Highway 63 to voice their opposition to a proposed Trump administration policy that would determine gender Thursday evening.

The policy would designate gender based on one's birth genitals, a policy protestors said could open the door for trans-discrimination.

"We already face discrimination on a regular basis," protest organizer Cathy Serino said. "Making those changes would amplify that and even embolden people to discriminate more."

Opponents of the policy said a strict definition of gender would cause Americans who don't identify with their birth gender to lose federal protections.

Serino said she staged the protest in a direct response to the proposal and also to let the president know just who it would affect.

"No matter where he goes in this country, he's going to find trans people," she said. Even in the middle of a red state like Missouri there's going to be trans people."
Shane Stimson says he came out as transgender in 2015. He said he came out to the protest to show who he really was.
"I think people being able to be who they are is most important," he said. "And to be able to live authentically, safely and respected, sharing that love, that's what's most important."

Stimson's mother Debbie was out there with him and she felt physically sick when she heard news of the proposal.

"I was scared to death and that's a lot of fear that people are feeling," she said.

Stimson said although she's never been much of a protestor, she'll come out to stand by her son.

"I mean why would you attack someone else's child?" she said. "I wouldn't attack his. Why can't I love my child for who he is?