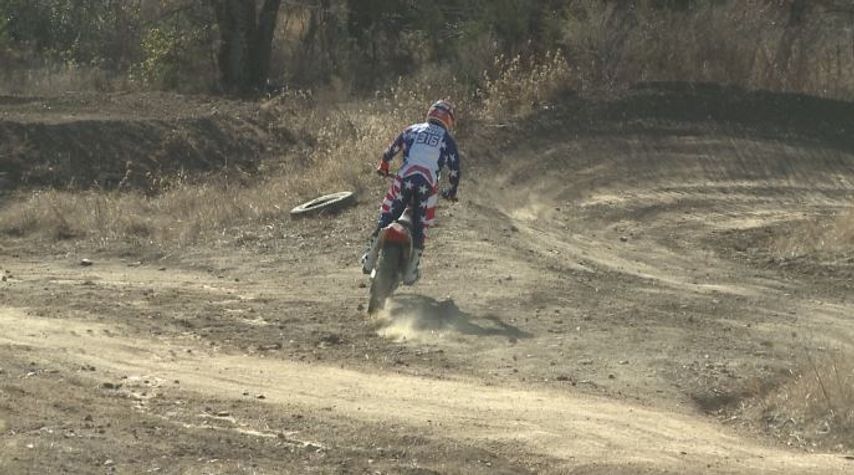 "When I was young my mom got me that first bike," Brady said. "Just the adrenaline rush and going fast. I just loved it. I couldn't get enough of it."

But Brady's decision to choose motocross surprised lots of people, including his own family.

His father died in a motorcycle accident when he was three after being hit by a car. An accident like that would scare many away from motorcycles all together, but according to his mother, Sandi Bernard, Brady used the accident as motivation.

"Brady rides on, really for the memory of his dad," Bernard said. "To try somehow to keep that life alive."

But she wasn't always as on board with Brady racing.

“I said no," Bernard said. "Absolutely not. The answer is no. And I’ve heard as a parent that if your child really wants something bad enough they’ll keep asking for it. And he did, for a year. And the answer was still no. And then he said 'Mom, I promise that my dad and my father in heaven will protect me, please buy me a bike.' And I did."

So he began racing, even though he said the thought of his father's motorcycle crash is always on his mind.

"The fact that my dad died on one always scared me, you know it’s that risk you take every time you get on a motorcycle that it can happen, but you just got to look past that and do your best at it and try to not crash," Brady said.

Brady said since starting to race he has been relatively injury free, but has endured some bumps and bruises along the way, including a broken collarbone and an injured knee.

But he doesn't let the injuries slow him down.

"I was actually missing being on the bike," Brady said. "So it was fun, and actually once you get back on the bike from injury some people actually progress and do better because they want to do better and get faster."

Brady stuck with motocross and in 2013, he found the break through he had been waiting for.

"I felt proud I could say I took first in the state on a 125 [cc engine race] at 15 years old," Brady said. "It was fun. There’s a lot of competition out there in Missouri and in every state. It’s just cool to say you took first in your state."

Now Brady said he is ready to take the next step and move towards becoming a professional racer. But his mom said his dream doesn't stop there.

"Brady has said he wants to go to Motorcycle Mechanics Institute and get a certificate for mechanics, for working on bikes," Bernard said. "Then eventually if things go the way he has planned he wants to open a store in this area, or somewhere that will offer used bikes, used gear, things that people on a budget, like us, can’t just run out and buy."

Even though he's been racing for years now, Brady said he still thinks of his dad before every competition.

"Every time I get on the gate I pray that my dad and my father in heaven keep me safe and watch over me and everybody else on the gate as we ride," Brady said.