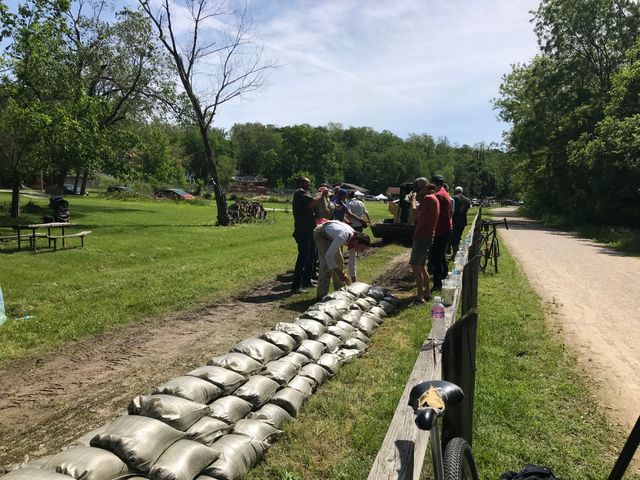 With recent rain causing flooding concerns for the small river town, city officials decided it was time to get a team together to sandbag the Katy Trail.

Dozens of volunteers fill the sand bags, loaded up trucks and put the bags down the trail. Some volunteers had the duty of providing ice water to those on the line.

Morale was up even though the heat was rising.

"I think everyone here today is excited about helping out," said volunteer Tom Scharenborg.

He said the community effort made it possible to work fast.

“A lot of the folks that live here know from the flood of ‘93 what to expect and when to start putting out sandbags, and this is one of those years,” he said.

Flood waters were already near the trail Wednesday morning. The river is expected to rise throughout the day and peak tomorrow.

The city is using the sand from its local plant to fill the bags, and it's already in short supply because of flooding at the plant.

“We’re having to deal with what we have,” said Rocheport Alderman Conrad Yates. “That may not be enough. We're hoping that’s enough.”

Residents are hoping their efforts work will minimize flood damage. They say they plan to keep at it until the water recedes.

“We’re just really hoping this isn’t a process that we have to repeat more often,” Scharenborg said.