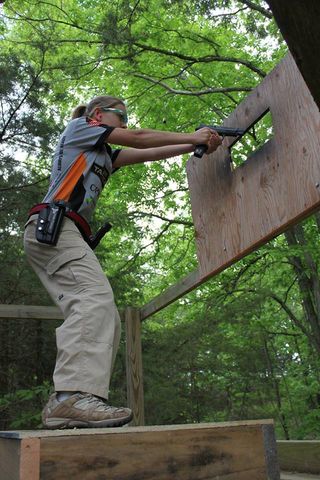 ST. THOMAS - In a backyard, tucked away in the small town of St. Thomas, Missouri, it's normal to hear gunfire echo. That's because it's littered with steel and cardboard targets, a perfect training ground for competitive shooters. The person practicing there might surprise you, 14-year-old Katie Francis. She's a freshman at Blair Oaks High School and a three-gun shooter.

"She does things most kids her age wouldn't know how to do or be trusted to do," said Katie's dad, Chad Francis.

"The guys at my school are all scared of me I know that," Katie said.

As a three-gun shooter, Katie uses a rifle, pistol and shotgun to hit various targets in competitions across the country.

"I get lots of compliments like, ‘Wow, you can handle your shotgun really good,' because that's my best gun, the shotgun," she said.

Katie has more than 37,000 Facebook followers, fans and sponsors. It's her gender, age and talent that have people watching.

"I'm one of only 10 females, I'm the only junior female that I know of," Katie said. "It's a guy dominant sport yes, I get that, but it's not just for guys."

Katie dresses in pink-rimmed protective glasses and earplugs, and sometimes a pink shirt. She wears her fuchsia gear as a reminder to her competitors.

"Show my inner girl, I'm not totally a guy," she said.

This teen discovered her shooting talent as a 5-year-old after her dad taught her gun safety.

"Then I kept begging him over and over again, ‘Hey, can I go out and shoot it, it's really fun,'" Katie said.

Her dad, Chad, is a retired Sergeant First Class for the Missouri National Guard. He also shoots competitively.

"To me it seemed irresponsible to have guns in my house and have children and not teach them to safely handle them or not handle them depending on what the case is and that's how it started," Chad said.

Katie shot in her first competition at age 12. Her skills gain national attention at a time when guns are a matter of strong debate, making the family the target of criticism.

Katie said the attacks won't keep her from pulling the trigger.

"I like the adrenaline rush, I'm like, ‘Wow, did I really just do that' and I like to set goals for myself then reach the goals," she said.

"She talked about maybe going to the Olympics one day, right now I'm just hoping she's having fun with it," Chad said.

For a dad with three girls, he's glad at least one took up his favorite hobby.

"We get a lot of bonding experience, that's for sure," Katie said. "We get to spend a lot of time to together, it's fun."