Loss of railway bridge to affect town of Brunswick 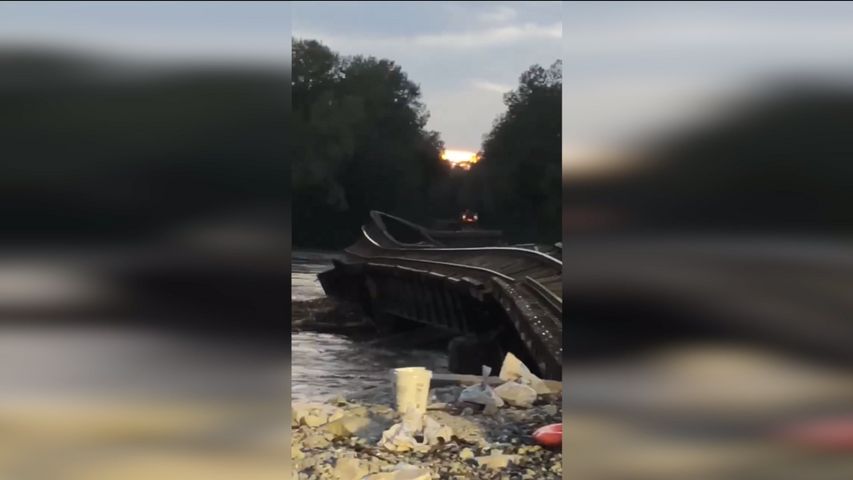 CHARITON COUNTY - In a small town of just 816 people, major events like a bridge collapse bring them together.

A logjam on the Grand River Bridge near Brunswick took out the structure Tuesday evening.

The video, posted on Facebook, shows the bridge started to buckle to one side, then collapse.

A viewer told KOMU 8 News the bridge near the Ray Caroll Brunswick elevator is gone.

"With all the trees and limbs piled up from the flood it took a toll and the railroad had to cut it," the viewer said.

Norfolk Southern sent out a service alert for the bridge Tuesday saying, "train service has been suspended between Moberly and Kansas City, Missouri, due to debris (caused by heavy rains)."

The company sent crews to the bridge Tuesday and updated the service alert Wednesday to say there "is no estimate on when the bridge will be restored to service."

Norfolk Southern said in the alert statement that it is currently "working with interline partners on detour options."

The transportation company said customers with traffic going through the area should expect a 48- to 72-hour delay.

The incident wasn't completely unexpected however, according to Emergency Management director Brent Dickerson.

"Later on in the evening, they thought they were going to lose the bridge," Dickerson said. "They went ahead and cut some of the rail on each side of the Chariton and Carroll County side, so if it did go out, it would kind of control where it broke."

Nonetheless, the community is finding themselves banding together, just like they did only a few months ago when flooding swept their tiny town.

"The railroad has impacted us a lot," Krystal Goddard, waitress at Sherry's Home Cookin' said. "For the last six months they've been here, through the flood, all the time, they help us and we feed them any time of the day."

The railroad runs through the entire town of Brunswick and provides much of the town's business and funding.

"When the rail goes through, our city gets tax money from them and also our school system does, so that could be affected with it," Dickerson said.

Another local said the bridge collapse will also greatly affect farming during harvesting season. The railroad carries grain out of Chariton County, and the missing portion of the bridge delays business.

While the millions of dollars spent in bridge repairs is on Norfolk Southern, the Brunswick community plans on helping pick up the pieces as much as they can.