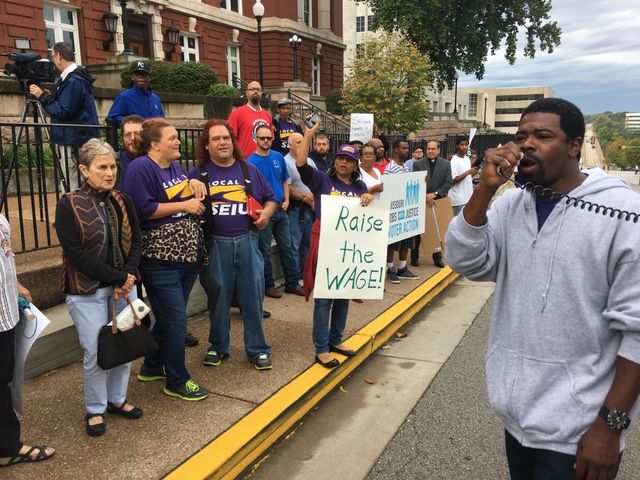 JEFFERSON CITY – It wasn’t the first time Missouri’s low-wage workers protested in the state’s capital when they rallied on the steps of the Missouri Supreme Court Thursday.

The St. Louis ordinance sought to raise the minimum wage to $11/hour by 2018, while the Kansas City ordinance increased wages to $13/hour by 2020.

Many protesters said they have children to support. One worker, D Whitehead, demanded justice for her and her 7-year-old daughter.

“I just spent my last money on her picture day outfit and pictures this Thursday,” Whitehead said.

The ordinances in both cities passed in 2015, but Missouri lawmakers responded with HB722, a bill that prevents city ordinances from setting minimum wages that exceed the requirements of federal or state laws, rules, or regulations.

“We did not have long to celebrate our victory as elected leaders here in Missouri decided that my family was not worth more,” protester Terrence Wise said.

He told the crowd he hopes the judges uphold the state’s values.

“The Supreme Court of Missouri should live by Missouri’s state motto,” Wise said. “Let the welfare of the people be the supreme law of the land.”

Kansas City attorney Taylor Fields argued the case pro bono with other attorneys and is hopeful workers will win.

“In the end, I think that we will prevail,” Fields said. “Let’s keep the faith and God will see us through.”

If the Supreme Court rules against HB722, other cities in Missouri, including Columbia, would be allowed to adopt a minimum wage ordinance. Rally organizers said they expect the court to rule in 60 to 90 days.