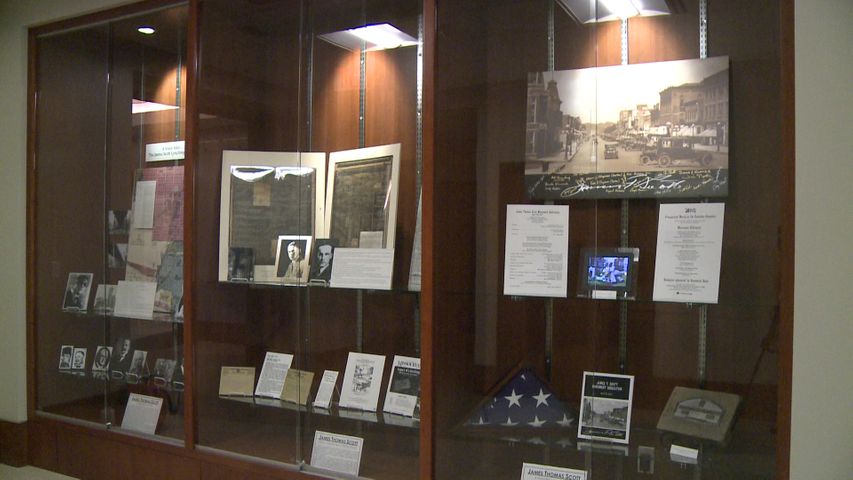 COLUMBIA - An exhibit to reconcile and remember the lynching of James T. Scott is now on display at Columbia City Hall. The exhibit, titled "A Voice Silenced: The James Scott Lynching in 1923," expands a memorial celebration by the State Historical Society of Missouri that was held on April 30.

The exhibit focuses on James T. Scott, an African-American who was a janitor at the University of Missouri's medical school. Scott was accused of assaulting a white girl in 1923, but was unable to stand trial because a mob broke into his jail cell and lynched him from a bridge on Stewart Road.

The display can be viewed at Columbia City Hall between the lobbies of the Historic Daniel Boone Building and the City Hall addition between 7:30 a.m. and 5:30 p.m. Monday through Friday. It will also be open during the evenings of City Council meetings on July 18, Aug. 1, and
Aug. 15.

The display is separated into three cases, each portraying different details of history. They show the history of the lynching and media coverage from the Missourian and the Columbia Daily Tribune from 1923. The third display case is a memorial for James T. Scott.

Renee Graham, a city public communication officer, is very pleased with the work the historical society and a university intern has done to make the exhibit meaningful for the community.

Tom Miller of the State Historical Society of Missouri said, "The society was honored to co-endorse the James T. Scott memorial events, and we greatly appreciate sharing this deeply meaningful story with the public at city hall."

The exhibit will be on display through August.