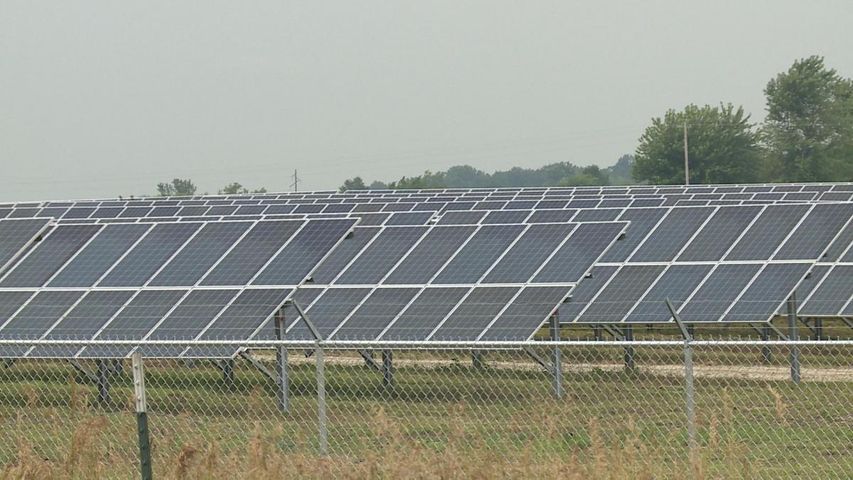 The farm provides power to 35 Missouri cities that are part of the Missouri Public Energy Pool (MoPEP). Aside from Macon, mid-Missouri cities set to receive power from the farm include Fayette, Hermann, Marshall, Salisbury and Vandalia. According to MC Power, the solar farm, which began producing power for Macon in May, is expected to generate an estimated 4,990 MWh of power annually, enough to meet the needs of 300 homes.

Stephanie Wilson, general manager of Macon Municipal Utilities, said Macon currently generates about 12 percent of its power from renewable sources. She said the solar power farm will not bring a major increase to its renewable energy percentage but is an incremental step.

"3.2 megawatts, it doesn't increase it very much," Wilson said. "It's a good size project for our town and for our peak use of electricity."

"It's 3.2 megawatts today, but those towns are adding 3.2 megawatts in their towns as well," Wilson said. "It makes more of our portfolio a renewable energy source."

"The City of Macon is really interested in green energy," Bagley said. "We make our contribution to the safe, clean energy for the citizens of the United States and Macon. It sounds kind of grandiose, but that's the way we think about it."

Loren Williamson, a vice president at MC Power, said Macon stood out among MoPEP cities for its willingness to take on the solar farm project.

"They showed a great deal of interest, the community was behind it, they had a perfect site behind their industrial park," Williamson said.

Bagley said solar power is just one form of energy the city intends to use in the coming years. He said the city also plans to capture methane from nearby landfill gas. Wilson said landfill gas energy is still years away.

"We do have a landfill a few miles away from Macon," Wilson said. "There's not quite enough methane yet to transfer that landfill gas into electricity."

According to MC Power, groundbreaking on a second solar farm is scheduled for Wednesday, July 8 in Trenton. The Trenton solar farm is expected to open in 2016.