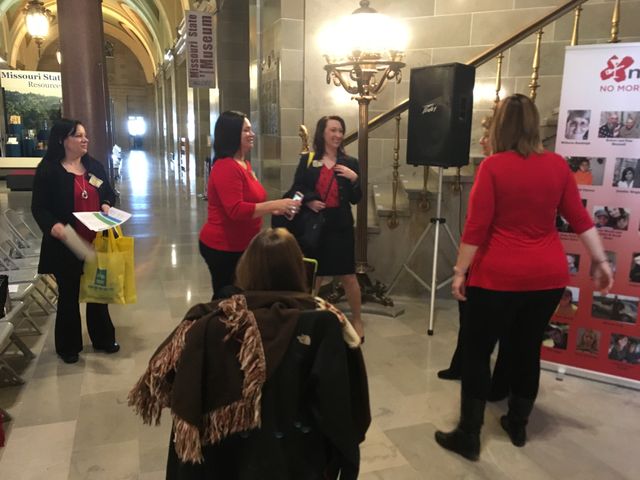 JEFFERSON CITY – Victims and concerned citizens are all working together to keep their community safe from drunk driving, specifically by getting funding reinstated for sobriety checkpoints.

According to the Mothers Against Drunk Driving State Executive Director, Meghan Carter, MADD Missouri has members of all ages.

“Our mission is to end drunk driving, help fight drug driving, help victims of these violent crimes and to prevent underage drinking,” she said.

Several group members gathered at the Missouri State Capitol Tuesday afternoon to raise awareness for the victims of drunk driving accidents. They also wanted to urge legislators to keep funding for sobriety checkpoints.

Members of the group identified themselves by wearing red, as well as a one-dollar bill on their lapel.

“Unfortunately last year through the appropriations part of the budget for the State of Missouri, sobriety checkpoint funding was limited to one dollar,” Carter said.

Clark attended the event with her daughter Tabitha. Two years ago, Tabitha was t-boned by a drunk driver at an intersection in Springfield.

Clark spoke to several people about her daughter’s story. She said when she had first received the call, she had no idea what was going on.

“Tabitha was in an accident, and you need to get to the hospital,” she said. “That was all I knew.”

She said she was in the hospital nearly two hours before she was able to see her daughter. Now, Clark said she is a big supporter of drunk driving checkpoints.

“If it can take one drunk driver off the road and prevent one family, one person’s life from being drastically changed,” Clark said. “It doesn’t just change the victim. It changes the family.”

KOMU 8 News has contacted the governor's office; however, we have not heard back from them.