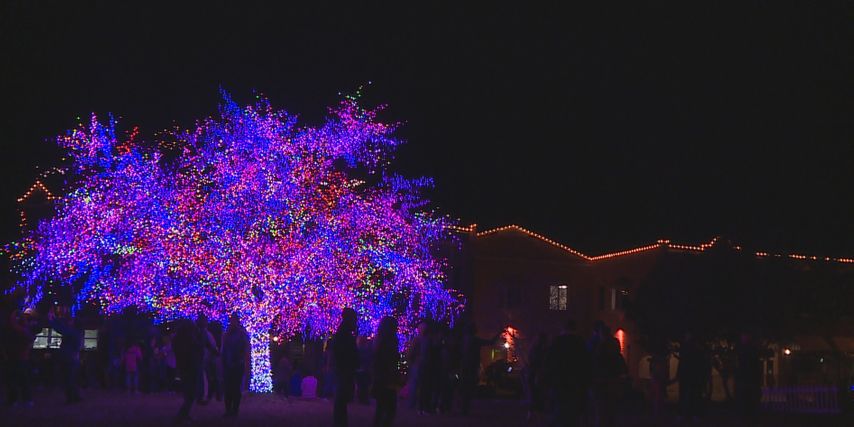 COLUMBIA - It’s a staple in Columbia every holiday season. The Magic Tree — a beloved cherry tree wrapped with Christmas lights — brings hundreds of people from all over the state, and Thursday night was no different.

The man behind the tree is Randy Fletcher. He calls himself Will Treelighter. He said he tries to have different color combinations each year.

“I stand back and think about what contrasts I want to see and then try to repeat it throughout the tree with variations, so that as you observe the different colors closely, each part of the tree has something a little different to offer,” Treelighter said.

He spent 68 hours covering the tree at The Village of Cherry Hill. It took 46,000 lights to cover the entire tree, he said.

“The lights are taken down each year so the tree can grow and a new color scheme can be created the following year,” Treelighter said. “I takes about the same amount of time as it does to put the lights up to take them down and get them ready for the following season.”

Sarah Devoto, from Columbia, said she can’t imagine the holiday without the Magic Tree.

“I can’t remember a Christmas without the Magic Tree since I’ve had children,” Devoto said. “We always have to come. You always got to squeeze it in and get your picture in front of it.”

Devoto has two small children. They come to the Magic Tree as often as 2-3 times a year.

“It’s definitely a tradition for us,” Devoto said. “We even started going back when it was at its other location, and so it’s really nice that now there’s a celebration around the lighting of it. Our kids love to come here.”

“It’s called magic because it almost looks like a human didn’t make it,” Devoto said. “It looks like something came down and made it just light up like that.”

“I think it’s a cool place to come take pictures at with your family,” Deimeke said. “It’s a good picture-taking spot for nights.”

The tree is lit each night through Jan. 6. The tree is also lit up for Valentine’s Day — including the night before.