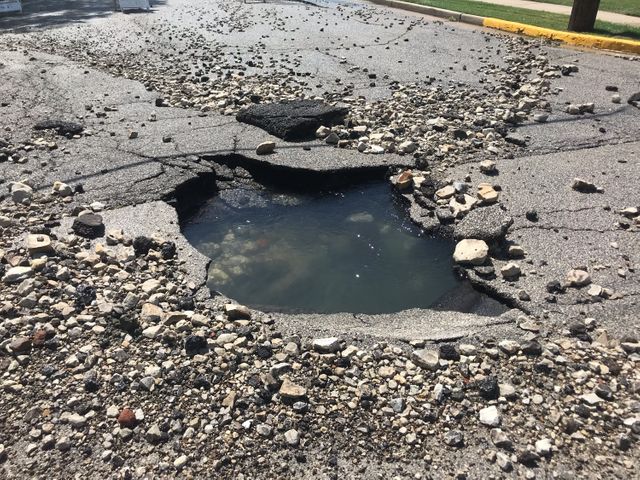 JEFFERSON CITY - A main break on West High Street left Jefferson City residents waterless and with a gaping hole in their street on Monday afternoon.

Another neighbor shared this video with me. His house is right on the corner of where the pipe burst happened. He said he had to stand under the tree to make sure he didn’t get his phone wet. @KOMUnews pic.twitter.com/E2lkdbP2c6

According to Justin Bates, a utility worker for Missouri American Water, the main break occurred around 1 p.m. By the time he arrived to the scene, water was shooting around 30 feet into the air.

“All main breaks are different,” he said. “You never know what you’re going to get until you get here, get down to the pipe and see what it is.”

Michael Kivett lives in the house closest to where the main broke. He said he had to stand under his tree to take a video because the water was “raining” on him.

“The geyser was going as high as the telephone pole — water everywhere,” he said.

Crews located and shut off six valves in order to stop the water. They also closed all sides of both West High Street and Clay Street to isolate the main break.

Dylan Blackwell lives nearby and said he saw the main break out of the corner of his eye.

“You ever been to Yellowstone National Park? Or you’ve seen it on Nat Geo? Big old fountain coming out of the ground,” he said.

Bates said initial repairs will take between four and six hours before the water valves can be turned back on. Crews will put new asphalt over the hole in the street in the next couple of days.