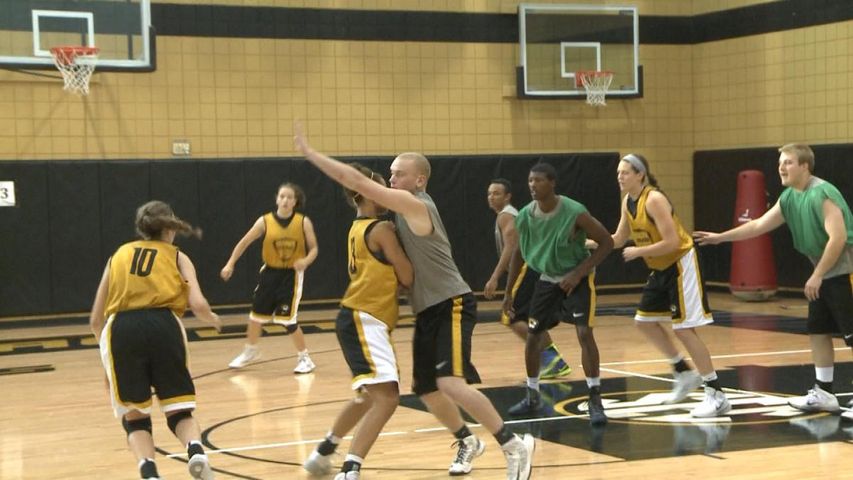 COLUMBIA - To improve the physicality of the Missouri women's basketball team, the coaching staff combed through the Mizzou campus for male undergraduates with game.

Head Coach Robin Pingeton has used a male "scout" team for all four of her years at Missouri, and coaches said the most college programs do the same thing.

"To go against guys that are bigger, faster, stronger, quicker, more athletic day in day out only challenges our players," Pingeton said.

If you think just anybody can be a scout team player, think again. The coaching staff said it searched for the best players it could find at the student recreation center, and then picked up players that just missed the cut to make the men's team.

"Everyone on the scout team is a top notch basketball player," scout team co-captain David Stark said. "I mean we're not scrubs or anything. We were probably all the best at our high school."

Stark actually was first team all-district when he played basketball at Mark Twain High School in Center, Mo. in 2010, but he has stiff competition for the title of best player on the scout team, according to his teammates. Michael Scott, the other co-captain, is one of those players with a claim at that unofficial title, but he said scout team members are not there to show up the other players or the women's team.

"I would say the best experience I get out of scout team is just still being around the game," Scott said. "It's a lot of fun coming out here and playing on Mizzou's court. It's a lot bigger than the rec is. A lot more competition than the rec."

That's basically what most of the scout team members said about why they play. It certainly isn't for tangible benefits. The scout team does not get paid, and MU is not allowed to provide members with benefits like shorts or sneakers. Team members also said they like being part of the team.

"We really have a great group of guys that put the team first," Pingeton said. "They aren't out here trying to relive the glory days. They really work hard to make our team better."

Putting in those 10-12 hours a week does pay off in giving the players a more competitive opponent than they are used to facing at the student recreation center, but when asked how the scout team would stack up against the women's team in a regulation game, players didn't have a definite answer.

"Honestly it goes back and forth," Scott said. "Sometimes they blow us out, and then sometimes we can get them so it just depends on the day."

Even though there is definitely friendly competition, the real goal of the system is to improve the physicality of the Tiger women's team. So if you see a great box out, someone fighting through a screen or a good fight for a rebound from one of the Tigers, you will find a proud scout team player somewhere in the stands.