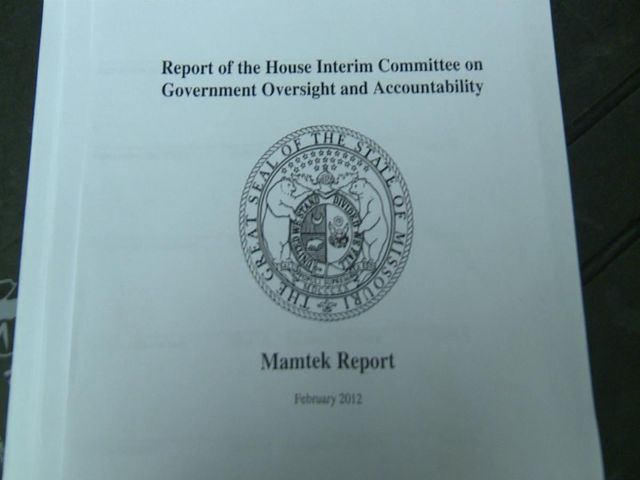 JEFFERSON CITY - A Missouri House Committee compiled a list of recommendations to prevent a situation like Mamtek to occur in the state again.  The Government Accountability and Oversight Committee will officially release its report Wed., but KOMU got its hands on the report a day early.

The list of nine recommendations start out with a better and more open flow of information between companies coming to Missouri for economic incentive and the Department of Economic Development.  According to the report, if all exchange of communication was passed on to government officials and not just the D.E.D. then bonds would have not been issued.

Another recommendation includes changing the department culture so local economic development officials will be more willing to speak up if there is uncertainty in a company.  The third recommendation is a better due diligence and more thorough background checks.  Fourth is a more defined description of third-party professionals' involvement.  The report said after all the testimony, not a single third-party professional took responsibility for the failed sugar substitute company.

The fifth recommendation is to make sure there is no conflict of interest when bringing in companies to the state.

The sixth provision is for due diligence travel in D.E.D contracts and willingness to expend other funds in the alternative.

The seventh recommendation is for the D.E.D to make Moberly a top priority.  That includes finding a company to replace the failed one so Moberly citizens can get back on their feet.

The eighth recommendation makes sure the D.E.D is being clear to the communities that would be affected by the company coming to their area.  The report cites one email that was deemed misleading to the community, reassuring Moberly that Mamtek was a legitimate company even though they were facing setbacks.

The final recommendation suggests projects be given an adequate amount of time to be thoroughly researched rather than being rushed and overlook issues.  According to the report, the committee belives the amount of time Mamtek was issued bonds was not enough for due diligence.

The Senate plans on releasing its report on Mamtek later this week.