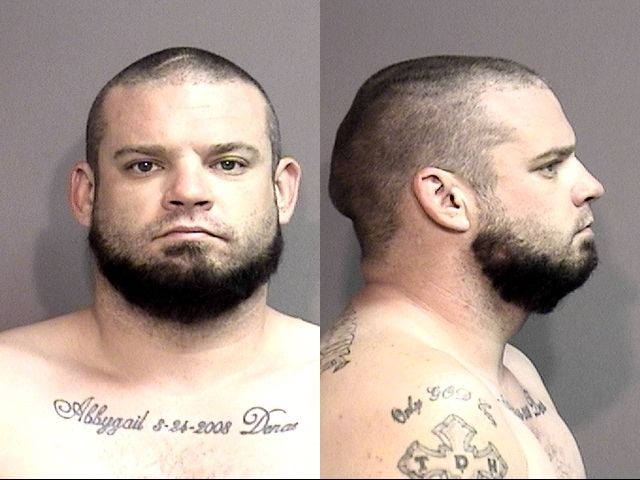 COLUMBIA - A woman told police a man strangled, sliced, punched and head-butted her, and assaulted her children while holding them all captive for a week.

The 29-year-old female victim told officers she and her children, ages 5 and 2, had run from Hartmann's house, where he had held them captive since Sunday, Aug. 14. The victim said she didn't live with Hartmann but was in an intimate relationship with him and that he broke her phone so she wouldn't be able to contact police.

The victim's report to police said Hartmann threatened to shoot the woman and her children, attacked her numerous times and hit the 2-year-old on the butt and the 5-year-old in the face.

On Monday, the victims escaped and called the police from a neighbor's home. Columbia Police Department Public Information Officer Latisha Stroer said officers arrested Hartman while he was searching for the victims.

"When the victim left the residence running with the two children, he also got into a vehicle and started circling the area looking for them," Stroer said. "And we were given a description of the suspect as well as his vehicle. And we located him and the vehicle on Yoko Court."

The woman said, over the course of several days, Hartmann strangled her to the point of unconsciousness. The woman told police Hartmann head-butted her in the nose causing her blood to get all over the bedroom.

The victim also said that Hartmann punched her in the stomach while in the laundry room before he stabbed the door with a knife and told her "this is what it's going to look like when you stand up." The woman said that she put her hands up to prevent herself from being stabbed and Hartmann cut her fingers with the knife.

Officers found multiple marks on the female victim including: a bruise in the center of her nose, a bruise on her ear, a mark on her chest, a bruise on the left upper arm, and bruises on her neck. Officers found cuts on her left middle and index fingers.

Officers said they found red marks on both of the children's butts as well as red marks on the 5-year-old's face below his eye and a bruise on the arm.

The Boone County Jail website said Hartmann is being held on a cash bond of $200,000 dollars.