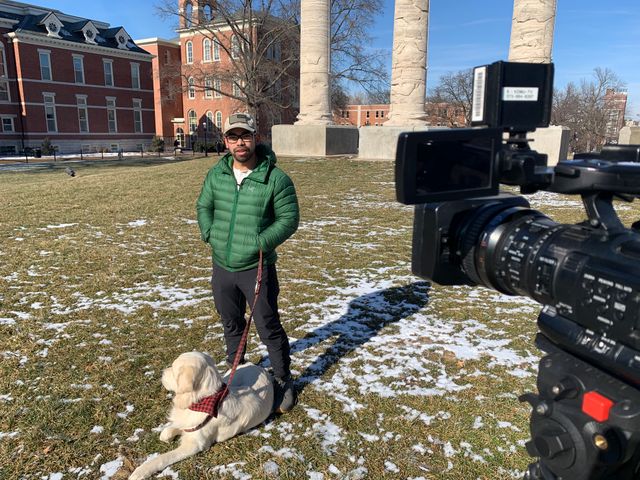 COLUMBIA - One man and his dog are wrapping up a cross-country adventure that is far from ordinary. Michael Angelo Brown and his year-old pup Atlas have been "globetrotting" together as a part of their mission to travel to 50 states in 50 weeks.

Brown and his English Cream Golden Retriever are only two states away from the finish line. Before reaching Kansas and Nebraska, the duo made a stop in Columbia on Tuesday.

Brown said traveling is nothing new for him. He comes from a military family where moving all across the world was just a part of his life.

"I have been traveling since I was a kid," he said. "I have been blessed to kind of see the world. It has kind of opened my eyes. I get to see things through a different perspective."

But after spending several years serving in the Army as a Special Operations Soldier, he decided to change things up.

"I didn’t want the military to be all I knew," Brown said. "So I wanted to start a project that I could be proud of in the end."

He said his decision to take on such a big adventure was very much "in the moment."

"All of this trip was completely spontaneous," he said. There was nothing really planned. I just drive into a state, I see what is going on and I go with the flow."

He wanted to learn more about the country and its abundant and diverse culture. He said the journey has been hard and would not have been possible without Atlas.

"We became family," he said.

Brown's companion has helped him learn about himself and assimilate back into American culture after time serving abroad. But he says the relationship goes both ways.

"I started living to help him out too," he said.

Having a companion animal is very healing for veterans, he said. It has also been helpful for him.

"You are forced when you are in the military, you don't know if you are going to survive until the next deployment," Brown said. "So your mindset is very short term. Having to care for another life really puts things in perspective."

The trip has been both a learning and a healing experience for Brown. After he makes his final two stops, he hopes to put together some sort of book about the experience. But he also wants to take elements from his trip and use them to help other veterans assimilate back into society.

He hopes to create a retreat program for veterans that teaches them what is available to them outside the military and what they are accustomed to.

"I want it to be designed to help soldiers that were in that survivalist mentality go back into that civilian mentality," he said. "With all the things I have learned through my travels, I think can implement that into my retreat."