Man bikes across U.S. to raise awareness of sexual abuse in men 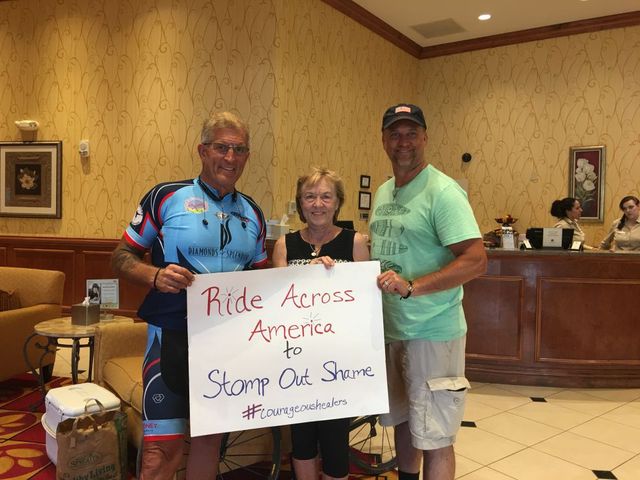 JEFFERSON CITY - A man biking across the United States maked a stop in Jefferson City to bring awareness to sexual abuse in boys and men Saturday afternoon.

Randy Boyd, the founder of the Courageous Healers Foundation, is riding his bike with the campaign slogan “Stomp out shame.” The foundation's goal is to help men and boys heal from the scars of childhood sexual abuse. Boyd said he was sexually abused for five years and wants to stop the shame that is related to the sexual abuse of boys and men.
The bike ride started in Indio, California, and plans to end in Beach Lake, Pennsylvania. Boyd said he has another slogan he thinks about when bike riding.
“Every turn of the wheel represents one voiceless boy or man that has been sexually abused,” Boyd said.
Boyd said he is out riding through the United States to help people start conversations about the abuse young boys and men may face.
“The silence is what is killing us. It’s what’s destroying men. It’s what’s destroying America’s families,” Boyd said. “They hold on to the secret and nobody can understand why they are so full of rage and anger.”
Boyd said he rides to different cities to speak at different venues and strike up different conversations with people on the journey. He spoke with a couple of people at a hotel in Jefferson City. One person even brought water and some food.
Debbie Hamler came to the hotel to meet Randy Boyd to welcome him to Jefferson City.
“I wanted him to realize Jefferson City was a wonderful city and to feel welcomed here. Not just coming in and getting a hotel and sleeping and driving off without someone giving them a little attention and greeting them,” Hamble said. “I was really hopeful they could meet with people and share and talk about what they’re doing.”
Boyd said he could have chosen to go on a boat, train or airplane. However, he thought the best way to get the message out was bike riding to expose himself to the heart of America.
"My voice, hopefully, will give people the courage to say ‘Hey, this guy, if he can go across the nation and speak up, I can find somebody to talk to about this,’” Boyd said.
Boyd left early Sunday morning to ride to St. Charles, Missouri.