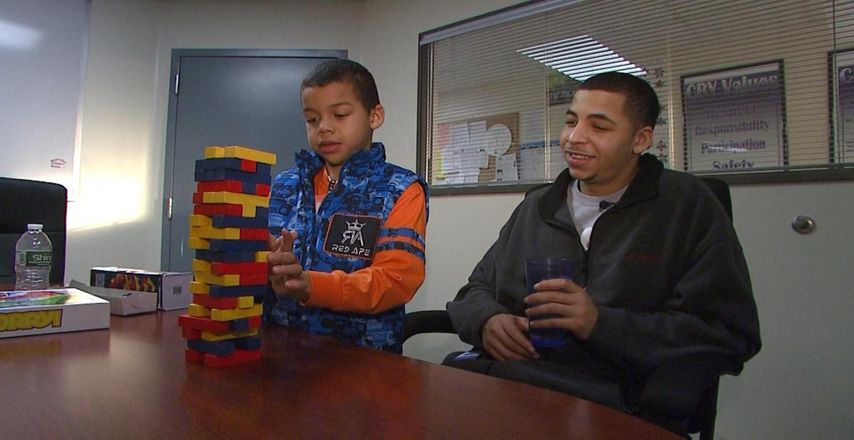 COLUMBIA - 26-year-old Zach Vaughn didn't start down the easiest path. He was a teen dad, a high school dropout and now, he has to work twice as hard to get where he wants to be.

"There's been a lot of challenges though like between getting to work and school and getting supplies for school," Vaughn said. "I know if I stick through it, it will be able to pay itself off in the end."

Rock bottom became the solid foundation he needed. It led him to Job Point's Columbia Builds Youth Program in 2011.

"We build houses or rehab houses and we build them from the ground up. We do all the concrete work, we frame them, we put the roofing on them," program instructor Glen Crowley said.

Vaughn tried the program twice. The first time he said he had too many other distractions.

"I was just too distracted just hanging out with friends, doing other things, partying, stuff like that," Vaughn said.

"And that's where you got to get them over that wall and after that [Vaughn] said, ‘I think I really want to start applying myself and being here and doing what you want me to do,'" Crowley said.

Vaughn spent nine months in the program learning construction and earning his GED with the support of people like Crowley.

"Push ‘em. I always push," Crowley said. "They want to be able to see what they can really do, what their abilities are."

"I believe I wouldn't be as far, I wouldn't have as many goals set. Job Point helps set goals, short-term and long-term goals," Vaughn said.

One of those goals was getting a job. Job Point helped Vaughn put together his first resume and Burger King manager Jim Yelton, liked what he saw.

When Vaughn's not behind the grill, he's behind a computer attending school at Moberly Area Community College.

"It's an honor," he said. "Being able to go to college so far, I think that's the best part...It means a lot, it means a lot for my future, for my family. Means my family will have a future basically."

Vaughn said he wants to go into graphic design and MACC is the first step.

"He finished the program. He set out a goal, he stuck to it and he's going at it," Crowley said.

"Whenever he walks in the door, he's always got a smile on his face. I'm always happy to see him. I know that he's going to jump right in and help us out," Yelton said.

Vaughn found some direction and hopes his children will follow suit.

"I hope it takes me to the next step by just lasting for my kids, like something for them to have when I'm gone," he said.

Vaughn was one of two winners of the Award of Excellence that Job Point gives out at its annual banquet. Winners are selected for exemplary employment and overcoming personal obstacles. Airiane Cairns, a Certified Nursing Assistant with Pyramid Home Health Services, was the other Award of Excellence winner. She completed Job Point's CNA program in partnership with Preferred Futures Healthcare Academy.

For more information on the winners and Job Point, click here.