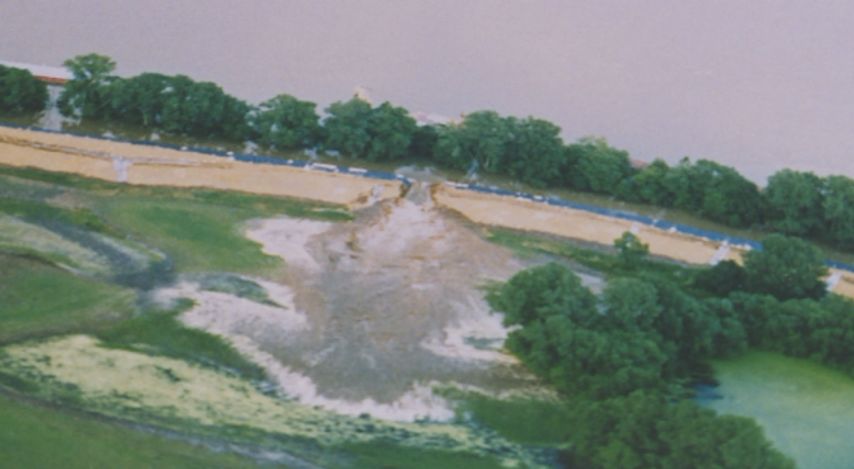 JEFFERSON CITY -  Only one person has ever been convicted of intentionally causing a catastrophe in Missouri, and to this day, he insists he is innocent.

James Robert Scott, a 48-year-old man from Quincy has been locked up in Jefferson City Correctional Center since 1994. He was convicted of intentionally breaking the West Quincy Levee during the Great Flood of '93.

“I’ve spent over half my life in prison for something I haven't done,” he said.

Who is James Scott?

He is an admitted criminal. He told said began when he was a child with petty thefts and arson, among other things.

"Small run ins with the cops," Scott said. "Leading to my arrest in 1988, and my conviction sentenced to IDOC for arson.”

Scott went to the Illinois Department of Corrections when he was 18 years old. At a time where people his age we're going to college and getting jobs, he was going to prison for three years.

Neal Baker, a Quincy police sergeant at the time, said the department caught Scott doing all sorts of things.

“An arsonist by nature, a lifetime criminal," he said.

Baker nabbed Scott for setting fires to a car wash, a man's shed and a woman's apartment.

"I decided that’s not the person that I want to be, and if I have to spend a lot of time in here then the best thing for me to do it is do the best I can," he said. "I decided to make changes."

Scott said he's used different programs and self help groups to deal with life in prison and change his attitudes.

On July 16, 1993, the West Quincy Levee failed, causing hundreds of thousands of dollars in damages. In the days leading up to the break, Scott said, he had been volunteering at the levee in an effort to improve his reputation.

“If I can kind of do good people may forget about some of the stuff I’ve done in my past," he said.

Scott said he walked the levee for a few days before it broke. He would look for weak areas and alert an authority figure.

On the morning of July 16, Scott noticed a weak spot and pointed it out to someone above him. Scott said the man didn't pay it a lot of attention, because he was focused on the guys he was in charge of in another area.

Scott said he left the levee shortly after and ran errands and showered before heading back around 6 p.m. to meet his then-wife Suzie.

While Scott waited, he said, he walked the levee some more, then noticed the same trouble spot as before. He said it had not gotten any better.

Scott said he decided to move sandbags on his own accord to bolster the weak spot. That was around 7:45 p.m.

Just before 8:30 p.m., the levee broke, sending everything there into a mass chaos.

Michelle McCormack, a reporter for WGEM, the NBC affiliate in Quincy, was on the scene and grabbed Scott for an interview. That's what made police take a close look at him.

Baker was sitting at home and watching the news. When he saw Scott on TV, he said, he immediately suspected him for destroying the levee.

“Jimmy Scott looked like a deer caught in headlights," Baker said. "He was very excited and I’ve always felt like half of him wanted to shout to the world what he had done and half of him wanted to get the heck out of there because he knew the enormity of what he’d done, or I think he did.”

Baker said, in the interview, Scott did not look like a typical levee worker. He was not wearing a life vest and he was clean, on what Baker described as a very hot day.

The biggest factor for Baker was how Scott acted in the interview. Baker told KOMU 8 News Scott was having trouble answering simple questions.

"An investigation was opened subsequent to that," Baker said.

He said he brought Scott in for questioning on a few other cases.

"There were five crimes they wanted to talk to him about: one was the burglary, one was bad checks, one was the levee break, one was an armed robbery, one was purse snatching," Baker said.

Scott, on the other hand, adamantly denies ever confessing. He said he was interviewed for hours and never admitted to breaking the levee.

The only man in the history of Missouri

In 1994, Scott was convicted of intentionally causing a catastrophe and sentenced to life in prison.

He said his attorney, Ray Leg, would not let him testify at trial because he thought the prosecution would attack his past. But, Scott said he wanted to testify.

“We can talk about me past and let the jury know I have nothing to hide," Scott said. "My past is just that, and I can’t change it."

Scott said, because he never took the stand, many people don't know what really happened that day.

“Only maybe besides my family, I think my attorney Ray Leg, and maybe one or two other people know exactly what happened on the levee that day," he said.

The trial lasted four weeks. Scott was sentenced to 20 years to life in prison.

In 1998, Scott got another chance, this time he reached out to Dr. David Hammer, a soil scientist, to be his chief expert witness.

“I decided he had a reasonable, a beyond reasonable, case here, that I didn't see how one person could have broken this levee under the conditions," Hammer said.

He joined Scott's defense team, but told KOMU 8 News that, to this day, has never actually spoken to Scott.

Hammer said he wanted to bring science into the case and prove why he believes Scott could not have broken the levee.

Hammer said he was stymied when a prosecutor objected to him using research from the Journal of Science, a prestigous journal.

"The prosecuting attorney jumped in and said, ‘Your honor, he didn’t do the research it’s hearsay.' And I was forbidden to use published, peer-reviewed, scientific literature in the trial because it was here-say and it was absolutely stunning," Hammer said.

Hammer said it wasn't the only time scientific reasoning was ignored.

“There was very strong scientific evidence that this levee was bound to break at this location and so all I would do is reiterate very strongly that this was a scapegoat situation, that there was money and local politics involved," Hammer said. "This was a travesty of justice that, in fact, has given the state of Missouri a black eye across the country."

At the end of his second trial James Scott was still found guilty and returned to Jefferson City Correctional Facility to serve the rest of his sentence.

Did James Scott do it?

Even 20 years after the second trial, Hammer still believes Scott is innocent, saying, if Scott did break the levee, he would've died while doing it.

"I don’t know how somebody under those conditions, as sloppy as things were and as moist as everything was could have done that and outrun the flood that breached the levee," Hammer said.

He believes the levee broke due to natural causes and it wasn't a matter of if, but when.

“There were six conditions that were identified as exacerbating the likelihood of levee failure. All six existed at that exact spot," he said. "That’s part one, part two is that this was the twelvth levee break in 11 days. The levees were failing in sequence just like dominoes falling.”

“I think someone looked at him and said there’s our scapegoat, we’ve got our money, let's nail him," Hammer said.

Baker, on the other hand, does not have a doubt in his mind that Scott did it.

“I do believe very firmly that he did it and that taking four or five sandbags from a depressed area of the levee on July 16 of 1993 sure could have caused that levee break," he said.

Baker said, over the years, he's heard different things people have said about corrupt officers just looking for a scapegoat. He denies that.

“I never went out with blinders on looking for one guy to pin," Baker said. "I never pinned anything on anybody."

As far as motive, Baker said he doesn't know why Scott did it.

"Gosh, he created so much hardship, why does somebody do something like that?" Baker said. "I don’t know, I’m not a criminal, but I know they do it.”

Baker does not even believe Scott's story about volunteering on the levee.

"I think he’s lying to you, and maybe to himself," he said. "But no, he didn't go over there to do that. He went over there to break that levee, nor had he been working on the levee.”

“I hope and pray that one day, hopefully soon, that I'll be released to go home," Scott said. "Like I said, this ain't home and prison is not home. I want to go and begin the next chapter of my life.”

Scott said there's a specific reason he has not given up even after more than 20 years behind bars.

“Always have hope," Scott said. "If I give up fighting in my beliefs, then the people who put me here, they win and I refuse to give them the satisfaction.”

Hammer does not think Scott should have ever gone to prison and says, after all these years, Scott should go free.

“It’s time to just say it’s over, its past," Hammer said. "There was sufficient doubt that we should just let this man go and live what’s rest of this man’s life."

Baker thinks Scott should still be in prison for at least a few more years.

“He’s got a bad criminal history," he said. "I think sometime after 2023 if he can prove he’s not a danger to society, sure.”