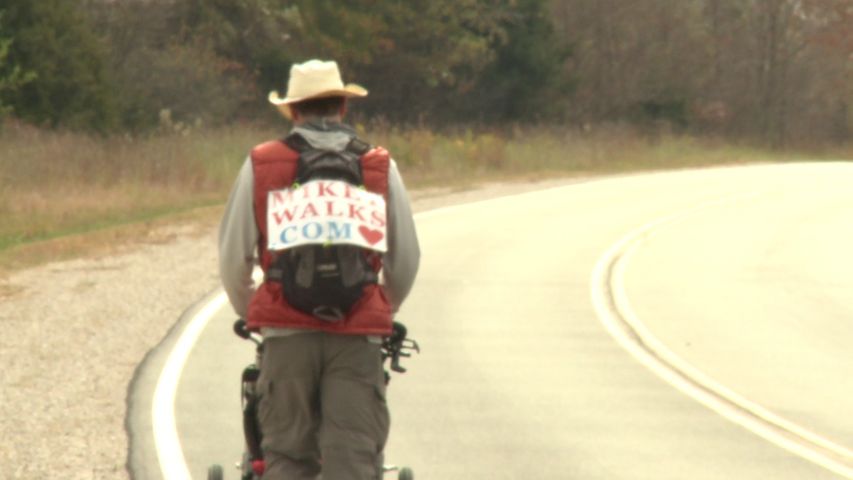 MONITEAU COUNTY - Mike Tittinger was just past the halfway mark of his 3,500 mile walk across the country as he passed through California and Jefferson City on Monday. Tittinger is walking to raise awareness for families of transplant recipients. He said he chose to walk simply because he can, and because it represents the recipient's road to recovery. He decided to set a route through mid-Missouri because Highway 50 caught his attention. Tittenger said it represents the fact that one organ donor can affect 50 people, be it recipients or their families.

Tittinger's late wife, Deanna, suffered from cardiomyopathy--an enlargement of the heart--and received a transplant before she passed away in 2000.  Deanna wasn't expected to live past the age of 10, but she made it to 30.  After marrying his current wife, Tittinger decide to start a scholarship fund to help families coping with the trials of transplants.

The fund is called the Onny and Oboe Scholarship Fund, named after Deanna Tittinger's childhood imaginary friends.  Tittinger said his goal is to reach $25,000 to give to transplant recipients and their families nationwide. He encourages everyone to become an organ donor. "Deanna had to wait about eight months to get a matching heart and, you know, you wonder what her fate might've been if she had received one earlier," he said.

Anyone can donate to the fund on Tittinger's website here. However, Tittinger said anyone can become an organ donor for free, which he said is "the easiest way in the world to be the hero."

Even though he's gone through five pairs of sneakers, Tittinger says he will keep walking until the money is raised. He said, "I look at it as more of a celebration of second chances. It's not so much a memorial, but it's forward looking."  Tittinger is not quite halfway to his goal, but hopes people will continue to raise awareness and donate to the scholarship fund.