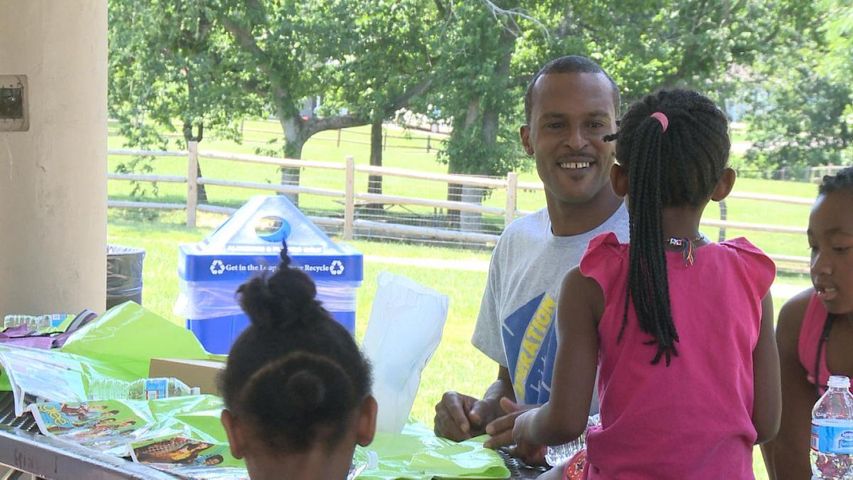 COLUMBIA - Marcus Buford left his job as a maintenance technician four years ago to devote himself full-time to his efforts to reach out to children who have incarcerated parents.

Buford said it all started with a prayer--the Lord's Prayer. Buford was at his old job when the first line of the prayer went through his mind. He related the first line, "Our Father, who art in Heaven," to his community.  He added, "Our fathers, who art in prison." He then created his own poem:

Who art in prison

It's your job to lead the way

On Earth 'til you go to heaven

Give us a chance to live our lives

As you've had a chance to live yours

And leave us not to be frustrated

But remember us and be there

For we are the future

And we need you

And we love you

"The poem is basically a message from the child to the parent that they are still needed in the child's life, even though they aren't physically there. Just a line of communication in terms of writing letters and sending cards throughout the year makes a big difference," Buford said.

Buford called his initiative "Operation KITE" when he started it in 2009. KITE stands for Keeping In Touch Eternally.

"In prison, when inmates want to communicate with another inmate in prison, they'll say 'Fly me a kite,'" Buford said. "I guess that's kind of the macho way for a male to say write me a letter, and that's kind of where all that Operation KITE came from."

Buford started to get the word out about Operation KITE by making backpacks that have personalized cards, crayons, pencils, and a coloring book.

Along with the backpacks, Buford gives free transportation to prison and bible camps for parents and adults who can't afford to get there. Buford also has a small facility with computers where children are welcome to learn how to work computers and interact with others.

Buford said he felt compelled to start Operation KITE because a demand was not being met by others. There was no free transportation to take children to visit their incarcerated parents. Buford said he felt it was something that was being pushed under the rug.

"I don't know if it falls along the lines of people understanding that there's possibly a need, but then looking at the situation of the person incarcerated being responsible for putting themselves there," Buford said. "So therefore, they kind of look at the situation as why we should help because of something that a person has done and they are being punished for it, for that particular crime. But they don't understand that the children are really the main sufferers in the whole situation."

People who lived in Buford's neighborhood inspired him to start giving back to the community, especially former Columbia city councilwoman Almeta Crayton.

Buford has known Crayton for more than 20 years. Crayton said it is important to see the younger community start to get involved because she said the older leaders in Columbia's black community are not able to do as many things as they used to.

"We need a new generation of people, particularly males, to try to become active. Because it's one thing for females to be in the community doing things, that's good," Buford said. "But just to have a male presence because it's mainly the male children who find their way into trouble."

Buford learned from his own experiences as well. He was in prison for three years for a drug offense.

"I understand what the parent is going through on that side," Buford said."And then, after I was released from prison, I was able to get custody of my daughter and get my life back on track. Then, I in turn raised a child in a single parent home."

This July, Buford is hosting a lunch program with the Food Bank for Central and Northeast Missouri. Parents and children can go to Indian Hills Park in the Indian Hills neighborhood to eat lunch, talk to Buford, and play with other children.

"I'm proud of him. I think he's going to take off," Crayton said.

Buford said he thinks that if he can show the younger community that there are different ways to live, and lots of possibilities, crime in Columbia will fall.

"Kids learn by imitation from whether it's a baby on up to just pre-teen years, so they kind of watch what we do and follow the same pattern," Buford said. "So, the more we can get out and do positive things in the community and show positive actions, I think the kids will in turn follow suit and maybe kind of curb some of the violence that is going on in the community."

For the future, Buford wants to expand Operation K.I.T.E by adding to the facility, and getting more kids to be involved with the program. He also wants to get a bigger car to transport more children to bible camps and prison to see their families.

Donations can be mailed to: