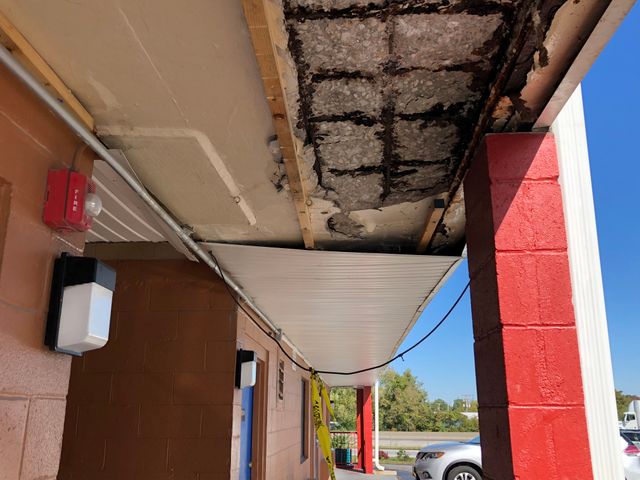 One of the motel's managers said the building as a whole was in "fine" condition when the walkway started to fall apart above a renter's door.

"It is very much habitable," Akbar Hussein, a Royal Inn manager, said. "The building is very strong. We have to do the walkway and our maintenance man said it needs to be done."

Hussein said the walkway falling apart was not wear and tear to the building. He said a maintenance worker purposely broke it down.

"He demolished part of it, that's what we can see here and now the city is asking us to get an inspector's analysis and hire a contractor to redo the walkway," Hussein said.

Hussein said the renovations to the building will take around three to four months to complete, and the city told Royal Inn that it can not rent the rooms to anyone in the mean time.

Deray Muntz had been staying at the Royal Inn for the past two months when he said the city knocked on his door and told him he had to leave because of the building's condition.

He and his family said they were confused when they were told to leave because they felt the living conditions were fine.

"The workers have been excellent, great service here and this is all of the blue," Muntz said.

Muntz said he and his family were traveling from out of town when they found the Royal Inn and thought it could be a place to stay for a while.

"Last night they come tell us that we all had to leave" Muntz said. "We have a son and we don't know what we're going to do. It's all confusing."

When city officials came by to tell Muntz and his family they had to leave, they asked about where else they could go instead.

The Royal Inn will not be open for MU's Homecoming weekend. The manager said he does not know when it will be open again.

KOMU 8 reached out to city officials for a comment but has not yet heard back.