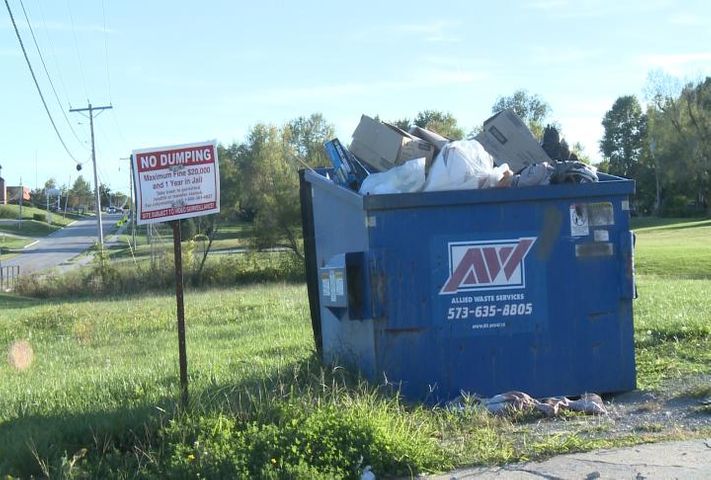 HOLTS SUMMIT - Dumpsters are overflowing with discarded waste and refuse in Holts Summit.

While some houses sport a royal blue trash can out front, a select few don't have a trash can. That's because not every home in Holts Summit is required to have a trash cart.

"We've encountered a trash issue with businesses who are having to pay more to dump more because citizens are putting their trash in the businesses' dumpsters," said Alderman Landon Oxley. "That's not fair to them."

The Holts Summit Board of Aldermen has been working with Allied Waste by looking into ways to correct the issue with incorrect waste disposal.

Oxley said the Holts Summit Board of Aldermen's has four different contract proposals. The first proposal is requiring each home to have a trash cart, which would add an additional monthly $11.20 onto sewage bills for Holts Summit residents, with a three percent increase each year.

The second proposal is to leave things the way they are, and the third and fourth are very similar to the first proposal.

"We are doing our best to do the right thing. We know we can't make everyone happy," said Oxley. "We just want to take care of the problem. Right now we have police men out picking up trash."

Oxley said that if people were unable to move the trash bins because of their weight, they could contact the city and an alternative plan could be implemented.

The Holts Summit Aldermen plans to make its final decision within the next month.