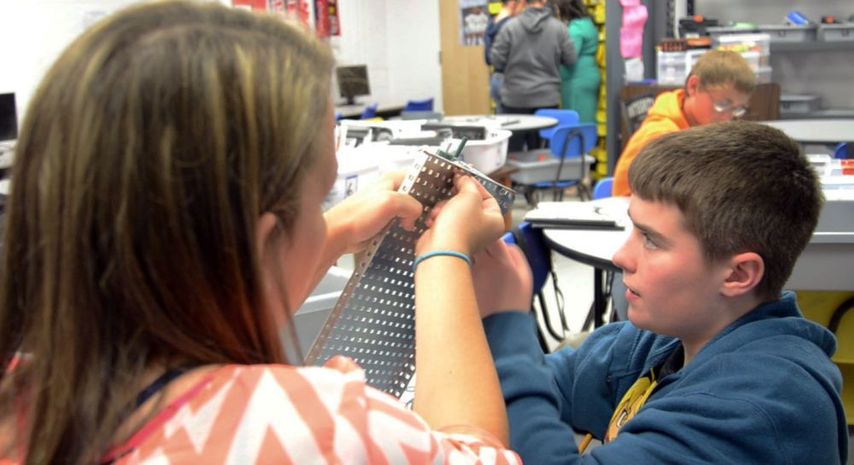 COLUMBIA - Some school districts in Missouri have made the switch to a four-day school week and they cite a variety of reasons: to stay open, to get new programs for their students and to promote professional development.

The decision to close one day of the week comes with challenges, but Superintendent of the Montgomery County R-II School District Michael Gray said it has lifted financial burdens, and benefitted students and teachers.

The Wellsville Middletown R-I School District is one of 16 districts to make the change over the past four years. Superintendent Pete Nasir said he knew a poor economy would affect his school district. He said the combination of a closed brick plant and the recession forced the number of students to drop.

He said the district initialized a three-pronged approach to save the school. In addition to applying for grants and a tax levy, it instituted a four-day school week this year.

“We’re hoping to maintain what we have by reducing our overall cost,” Nasir said.

The other school districts made the switch had different reasons. (Read more.)

“It helps fill the reduction in funds from the state in state aid,” Call said. “It would have come from gambling and the lottery. Those funds come in short every year.”

Call said the money saved by going to a four-day week allowed the district to complete various projects, such as buying a school bus, replacing an ailing elevator in the high school and repairing roofs.

Some districts use the extra day as professional development time for teachers, so they can prepare for their classes without taking up hours on their weekend.

“Teachers love it, and feel like they’re fresh and able to focus on what they need to do,” Gray said.

Teachers now have consistent openings to schedule doctor appointments and other errands, he said.

“We found drastic reduction in substitution teacher cost because teacher absences went down,” Gray said. “In the first year, we saved roughly $30,000.”

The four-day schedule is attractive to those looking for work, said Bob Curtis, principal of the Community R-VI middle and high schools in Laddonia. He said a recent opening at the middle school received twice as many teacher applications than it usually would. Curtis said the district often struggles to find job seekers.

“In some of our suburban areas, if a math job opens up or a science job opens up, we'll probably get from 25 to 40 or more applicants for those jobs,” Lewis said. “In many rural areas of Missouri, they might get three. And of those three, maybe two of them would need to be certified to be teachers.”

The new schedule means school days were lengthened by more than an hour, which is not attractive to all school districts.

The Lexington R-V School District made the shift for two years and then went back to a five-day school week in 2015.

“The main reason for the change was the length of the school day for the four-day week was too long for our younger students,” said Michelle Roush, assistant superintendent of Lexington R-V School District.

Another concern of a four-day school week is that students could have less class time.

Gray said he was surprised to see the opposite happen in the Montgomery County School District.

“If you take our four-day week and compare it with our previous five-day week, our students over a year's time are in front of a teacher more minutes than they were on the five-day week,” Gray said.

Another potential problem is that low-achieving students could possibly not get the attention they need to succeed.

Lewis said, “I think we could end up losing some kids, it would be easier for them to not come to school and I think that's one of the reasons that the larger schools say we want to stay with that five-day work week because they know the benefit of having those kids five days a week is critical because we don't want to lose them.”

Gray said it has not been a problem for the Montgomery County R-II School District.

“In fact, most of our students that we thought were low achievers, or really struggled in their learning, have come to us and said ‘I've found that even though I may not like school I can get through these four days easier,’” Gray said.

Test scores and achievement levels have not dropped for students within his district, he said.

Lewis said he also had concerns about what happens to his district’s students once they leave secondary school and move into the workforce, which requires a five-day week for most occupations.

"I think one con is that we all right now are working on a five day work week. That's been around for a long, long time.” Lewis said.

However, Gray said graduates have come back and told him that a four-day school week is much like college. He said they told him it was not a hard transition.

“We've got some students that are now graduating college and the ones that have come back said ‘Mr. Gray, it's not much different than college,’” Gray said. “I may have all my classes on two or three days, and have the other days where I go to lab or I go do this.”