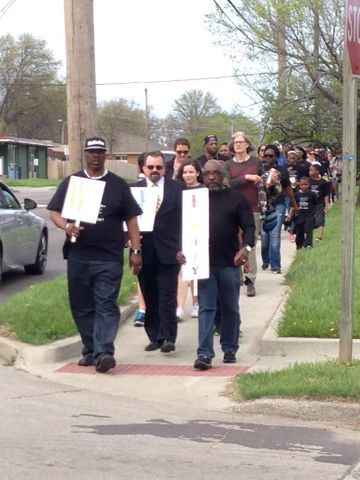 COLUMBIA - The sound of chanting and a wave of signs filled the streets of downtown Columbia Saturday afternoon.

Glenn Cobbins Sr. created the march called "We Are Family." It raised awareness to black on black crime in the community. Cobbins said the idea came to him in an usual way.

"I had a dream," Cobbins said. "These words appeared to me, like a bright light they said, ‘it's the white man you should fear, but it's my own kind that's doing all the killing here."'

The words are from the lyric by rapper, Tupac. Cobbins said there are many organizations like the NAACP that focus on violence against blacks, however not many focus on black on black violence in the community.

Cobbin said from 2008 to 2012, more than 382 blacks have sustained an injury by a firearm. According to the statistics from Cobbin he said were provided by the Columbia city manager's office, during that four year timespan, out of 100,000 people, 14 whites were killed compared to 234 blacks, ages 15-24.

Marcher Maxine Lambert Holland said gun violence concerns her because of what happens after the shooting death.

"It's like killing two birds with one stone. You kill one black, you end up going to prison. There are two black lives at a loss." Lambert Holland said.

City Manager Mike Matthes marched alongside dozens Saturday and spoke outside the Boone County Courthouse. He emphasized the need for safety in the community.

Cobbins said city officials were extremely helpful during the planning process and the planning took about six to eight weeks.

Cobbins emphasized the march was not to divide black and white, rather to raise awareness about a concerning community issue.

"This is not about racial divide. This is about racial union, black, white, Hispanic, Native American, rich or poor," Cobbins said. "Let's all get together, especially in Columbia, and let's be a prototype for the rest of the nation."

Cobbins said he hopes to create another event like this one to create a sense of unity and to stop violence in its tracks.

[This story has been updated to clarify the source of information.]