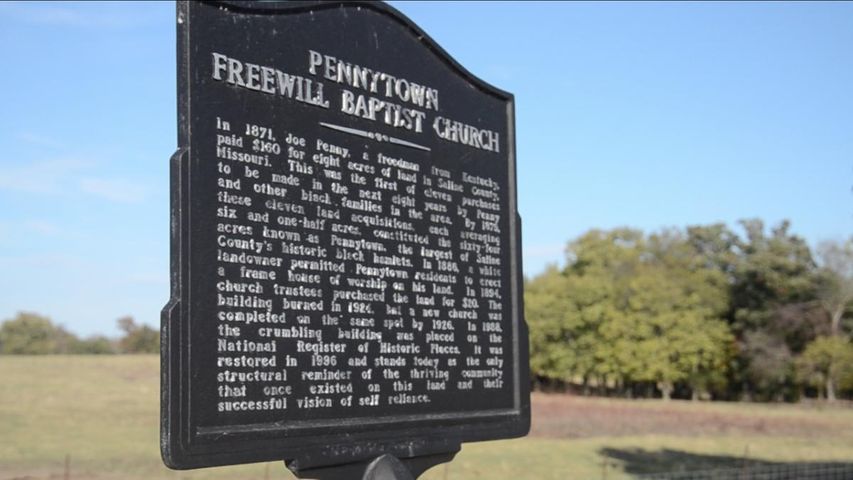 SALINE COUNTY - Located eight miles southeast of Marshall sits a church. It is the last reminder of what used to be a thriving black community known as Pennytown.

The settlement was started back in 1891 by a freed slave named Joe Penny. After traveling from Kentucky, Penny paid $160 for eight acres of land in Saline County. This was the first of eleven land purchases made by Penny and other black families that eventually made up Pennytown.

Virginia Huston was the last person born in Pennytown, something in which she takes great pride.

"Not many people can say I was the last person born in such and such. That is something that no one can take away from me. And I am thankful and proud to be a descendant of Pennytown and I will shout it to my grave," Huston said.

Huston described the people who lived in the town as hardworking and determined to make a prosperous life for themselves.

"They were very trustworthy people, honest, reliable and responsible. I am proud to say that we do have a rich heritage and our families were special. They were spiritual. They believed in togetherness, unity and loving one another," Huston said.

Even though the population of Pennytown has faded away, Huston believes it is her job to make sure her heritage is never forgotten.

"I am trying to find out as much as I can of my relatives so that I can pass it on to the younger generations. Because we want to know where we came from," Huston said.

Huston said the memories of this town were preserved mainly due to the efforts of her mother, Josephine Robinson Lawrence. It all started when Lawrence was still in school. She had gotten in trouble and as her punishment, Lawrence was instructed to write a paper about Pennytown.

"She would go to all the ladies and men in the community and ask questions about Pennytown," Huston said, which inspired her mother's passion to keep track of Pennytown's history.

Using the collection of historic documents and memories passed down from generation to generation, Lawrence was eventually able to get the Pennytown Freewill Baptist Church listed on the National Register of Historic Places in 1988.

Now, in memory of her mother and ancestors, Huston has taken on the job of preserving what history is left of Pennytown.

"Our descendants they worked hard; they struggled. And the least we can do is in the preservation of it is let people know how hard they worked," Huston said.

For more than 50 years, descendants of Pennytown have gathered at the church to remember the memories that were made in Pennytown. This tradition continues today on the first Sunday in August each year.

Gov. Parson will not appeal ruling for abortion clinic