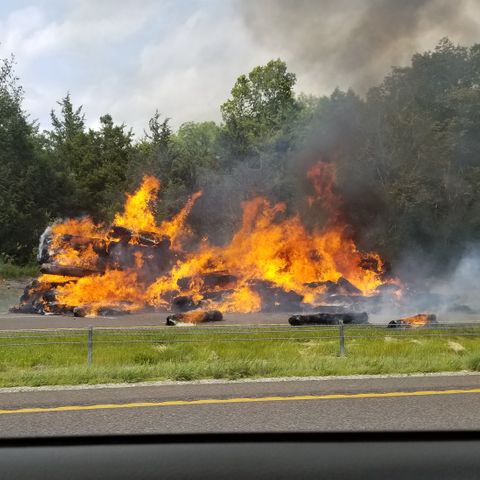 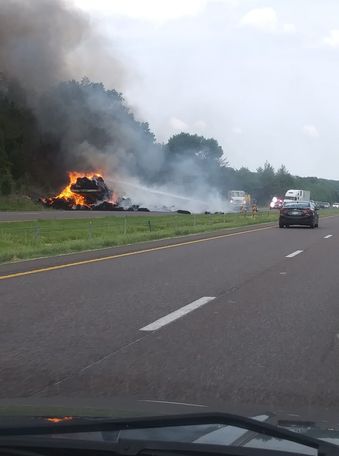 COLUMBIA - Fire gutted a truck near mile marker 118 on I-70 Monday afternoon.

The conflagration created significant traffic delays, with Missouri State Highway Patrol Troop F tweeting both lanes were closed and traffic was diverted. MoDot reported one lane was back open at 5:20 p.m.

Viewer Jenn Bronson, who sent KOMU 8 News the featured photo, said the burning vehicle was a log truck and described westbound lane as at a "complete standstill." Other viewers have said it was straw that was burning.

MoDOT said the road closure stretched between Route 40 and Route J westbound. The detour was Route 40 and then Route J back to I-70.

Viewer Nicole Miller, who contributed the second photo above, captured the action from the eastbound lane.

"The driver unhooked his trailer and was standing by his truck when they were putting out the logs," she wrote on the KOMU 8 Facebook page.

Miller said just the trailer with the logs was on fire. It was 4 p.m. when she took the photo.

I-70/BOONE COUNTY TRAFFIC ALERT: Vehicle fire in Westbound lanes of Interstate 70 between the Route 40 and Route J interchanges west of Columbia. Both lanes are closed and traffic is being detoured around the accident. pic.twitter.com/EpwxYv58Dl

4:35p Extensive back up on I-70 W as highway is shut down due to vehicle fire. pic.twitter.com/uS8JI5s3GW

9:12p Debris has been cleared from the roadway and both lanes of I-70 are open.