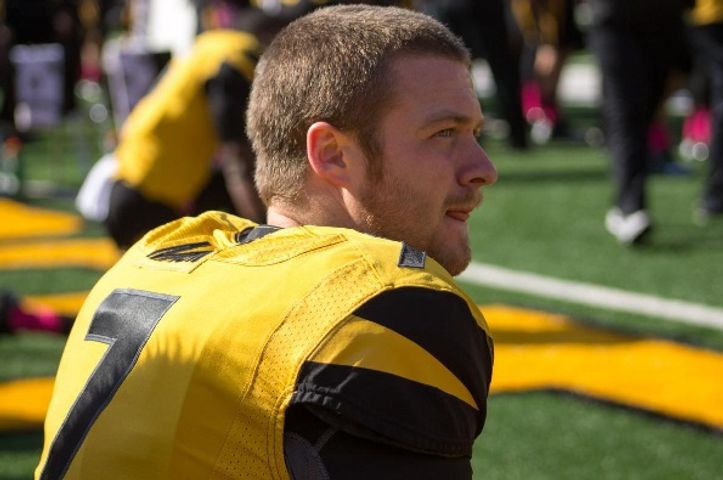 TOLEDO, Ohio - Maty Mauk had a career afternoon as the No. 24 Missouri Tigers beat the Toledo Rockets 49-24 to improve to 2-0 on the year. Mauk threw for 325 yards and 5 touchdowns as the Tigers easily handled Toledo in head coach Gary Pinkel's return to his former school.

The Tigers got on the scoreboard on their second possession of the game. After taking over at the Toledo 45-yard line, Mauk completed his first two passes before Russell Hansbrough trotted 16 yards into the endzone to put Missouri up 7-0. The Tigers held this advantage for two possessions until Toledo's Kareem Hunt sprinted 38 yards to even up the score 7-7.

Mauk responded immediately following the Rockets touchdown. The sophomore opened the drive with a 45-yard bomb to Darius White. After a 19-yard pass to Jimmie Hunt, Mauk scrambled out of the pocket before finding White in the endzone for a touchdown to put the Tigers ahead 14-7.

The Rockets looked poised to tie the game after picking off Mauk in Mizzou territory, but Bud Sasser forced a fumble and Mizzou's Hunt recovered. Although the Tigers ended up punting, they were able to prevent Toledo from adding at least three points on the board. The fumble recovery also extended Missouri's turnover forced streak to 46 straight games.

Mizzou added another turnover immediately as Aarion Penton snagged an errant pass and returned it 38 yards to put the Tigers in excellent field position. Mauk found Bud Sasser for 24 yards before running into the endzone himself from a yard out to extend Mizzou's advantage to 21-7.

After Marcus Murphy returned a punt 34 yards later in the quarter to once again put Missouri in great field position, Mauk found the running back for 26 more yards. Mauk then rifled a pass to Hunt to cap off a stellar first half as the Tigers took a 28-7 lead into the locker room.

Missouri continued its dominance in the second half. After forcing the Rockets to punt, Mauk led the Tigers 85 yards down the field, capping off the drive with a 13-yard touchdown to Murphy. It was Mauk's third passing touchdown on the day.

Toledo responded with a scoring drive of its own as Kareem Hunt punched through the line from one yard away. It was the running back's second touchdown of the game. After the Toledo defense intercepted Mauk for a second time, Hunt added another one-yard score to pull the Rockets within two scores 35-21.

Mauk wasn't fazed by his earlier mistake. The quarterback found Sasser on successive completions of 47 and 25 yards, respectively. The latter was Mauk's fourth passing touchdown on the day. Sasser finished the game with 5 catches for 121 yards.

Mauk added his fifth touchdown in the opening minutes of the fourth quarter to put Missouri up for good 49-21. The Rockets added a late field goal, but the Tigers were already celebrating a victory.