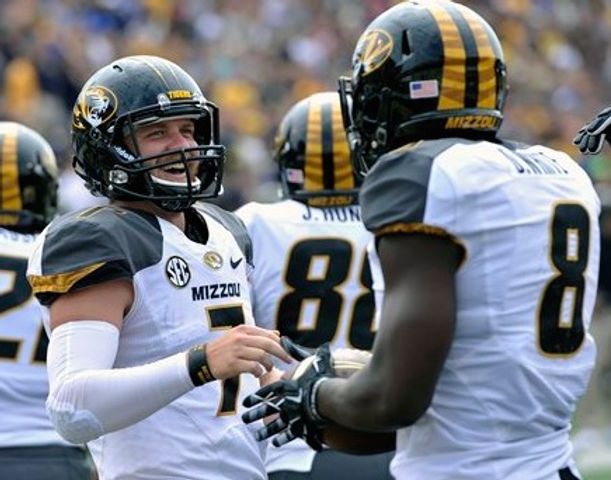 COLUMBIA - Maty Mauk tossed four touchdown passes and Marcus Murphy added 94 yards on the ground as the No. 20 Missouri Tigers defeated the Central Florida Knights 38-10 to improve to 3-0 on the season. After a close first half, Mizzou relied on its defense to cruise to a win.

After a defensive stop on the opening possession, the Tigers took advantage of a short field. Mauk led the offense 40 yards, capping off the drive with an 11-yard touchdown to Jimmy Hunt to put Missouri up 7-0.

The Knights responded with 10 unanswered points. They added a field goal immediately after Missouri's scoring drive. After intercepting Mauk on a mistimed deep pass, the Knights had good field position. UCF quarterback Justin Holman drove his team down the field and finished the drive with a two-yard touchdown pass to William Stanback to put the Knights ahead 10-7.

Mauk recovered quickly from his earlier mistake. The quarterback led Mizzou 75 yards down the field and put the Tigers up 14-10 after hitting Hunt for another touchdown. Although Central Florida had a chance to cut the deficit to one, the Knights missed a field goal just before halftime. Missouri went into the locker room up 14-10.

Both defenses dominated the third quarter. There was only one touchdown in the quarter and Missouri got it. After Josh Augusta intercepted Holman to keep Mizzou's turnover streak alive, Mauk found Bud Sasser from 21 yards out to put Missouri up 21-10.

Missouri owned the final quarter. The Tigers scored on the opening drive of the period as Mauk found Sasser again. This was Mauk's fourth touchdown pass of the day and his 12th of the season.

After a Mizzou field goal to extend the lead to 31-10, the Tigers closed out the contest with their defense. Braylon Webb intercepted Holman on the following possession to end any hope of a comeback. Duron Singleton added to the rout two possessions later after he returned a fumble 60 yards for a touchdown to put Missouri up 38-10.

The victory pushes Missouri's record to 3-0 on the season. The Tigers will be at home next week against Indiana before entering conference play.