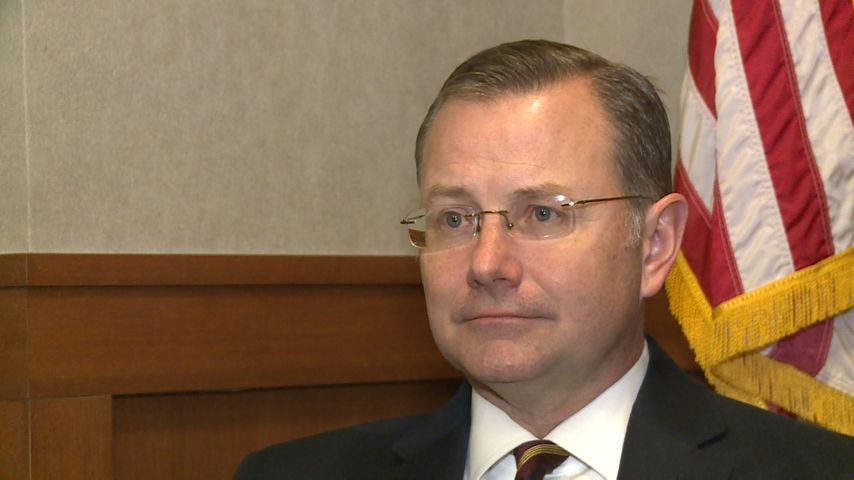 The Columbia Missourian report said "on multiple occasions, Burton arrived well after 8 a.m., usually between 9:45 a.m. and 10:30 a.m." The newspaper also said "on more than a half dozen occasions" between Oct. 31 and early December at Flat Branch Pub & Brewing , its "reporters observed Burton arriving shortly after 4 p.m., sitting at the bar and drinking alcohol."

"If true, those types of allegations really deteriorate not just the work ethic of everyone below you, but, you know, really impairs the morale and a backup that our police officers, and frankly, all city employees deserve," Treece said.

Treece said Burton's decision to resign was his.

"I think it's really an opportunity for a new generation of leadership, a new example of leadership to really move Columbia forward in the new year," Treece said. "I think that's great news - not just for the community but for our police officers that work hard every day."

On Dec. 20, the city announced Burton was placed on paid administrative leave. On Dec. 28, the city said Burton will resign effective Jan. 3.

In a news release Friday, the city said it "provided two months separation pay." Burton started with the department in 2009.

Interim City Manager John Glascock will decide who will serve as interim chief until a permanent chief takes over. Deputy Chief Jill Schlude is currently serving as the acting police chief.

A city news release on Friday said "in the coming weeks, Glascock will be conducting a process to fill the interim chief of police."

Treece did not elaborate on the process, and Glascock could not be reached for comment Monday.

The timeline for the city hiring a permanent police chief is not immediately clear.

Treece said Glascock could hire the permanent police chief, but Treece said he had not spoken to Glascock about his thought process.

Last week's news release said "a search for a permanent chief of police will not begin until after the Columbia City Council has installed a new city manager."

Trapp said he thinks Burton's resignation is "good for the city."

"It's gonna give us a chance to have a fresh start and to be able to better, you know, address issues around community policing," Trapp said.

Treece said he sees the change in leadership as an opportunity to prioritize community-oriented policing and make sure neighborhoods are served.

"I do think having the opportunity [to] select a new interim police chief can, just like John Glascock has done in the city manager's office, can help right the ship if you will in a way that improves morale, improves that work ethic and makes sure that we're putting all of our resources where they're needed to keep our community safe," Treece said.

In a statement, Ward 4 council member Ian Thomas said: "I thank Chief Burton for the good work he has done in Columbia, especially the new 'use of force policy' he implemented several years ago. As we enter 2019, I am looking forward to helping our new City Manager appoint a new Police Chief with experience in and a commitment to community-oriented policing."