Mayors from across Missouri meet to discuss safety in the state 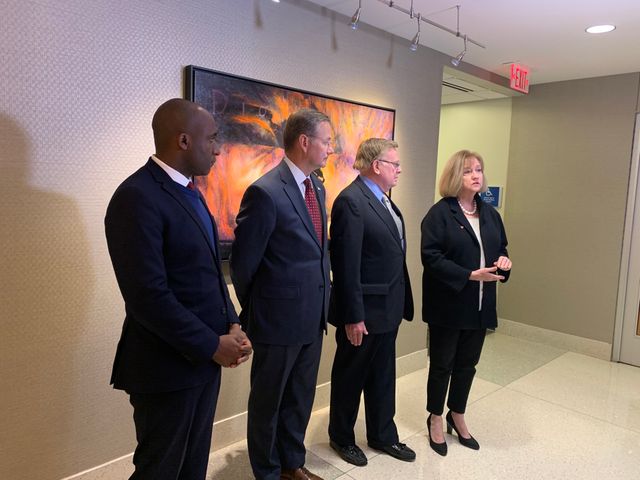 COLUMBIA - Brian Treece hosted the mayors of Kansas City, St. Louis and Springfield in Columbia on Friday to continue a discussion on how to make their cities safer for residents.

This was their third meeting together. Invitations went to police chiefs of each city, along with the leaders of commerce as well.

Treece said the mayors are focused on three main topics: witness protection, mental health and keeping guns away from children. With the spike in violent crimes in September, Treece said he knows he needs to look out for the families of gun violence victims.

"We know that the traumatic impact of violent crime has a tremendous impact on not only that victim, but also the victim's family for generations to come," Treece said.

Treece added he wants to make sure law enforcement officers have the ability to safe guard witnesses, both at the scene of the crime, and throughout court proceedings.

Treece and the mayor of St. Louis said they are meeting with lawmakers to see what kind of laws can be passed.

One resident from Rice Road, where three homicides have happened since the beginning of September, said he thinks police could help make a bigger difference in his neighborhood.

"If they would just simply follow through and do their jobs that they are hired to do," said Lonnie Higgins.

Higgins said he wishes the police would interact with residents more.

Another resident of Rice Road said she doesn't think laws are going to make a difference.

"You can make all kinds of laws and have all kinds of meetings. Give people barbecues, but if people don't have a change in heart, I don't think anything will work," said Sharon Crowley.

Crowley said she doesn't think it's her neighbors that are causing the issues, but the people moving in and out of the area.

"I just feel kind of helpless," said Crowley. "I don't see any hope unless people themselves make a change within themselves."