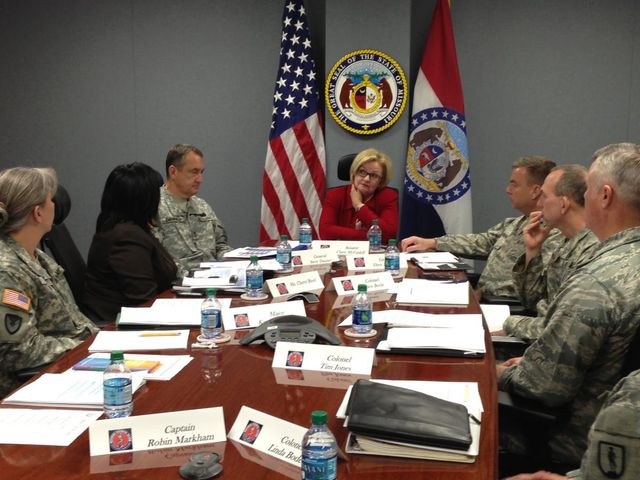 JEFFERSON CITY - Senator Claire McCaskill, D-Missouri, held a round table with the leaders of the Missouri National Guard Wednesday focused on combating high rates of suicide and sexual assaults in the military.

"It's not about educating women how to avoid circumstances, where they might be a victim. It's about getting after the criminals and putting them in prison," said McCaskill starting the meeting.

McCaskill said she held this discussion to get input from the local level. According to McCaskill, Missouri is a great example to other states dealing with sexual assault issue.

"There are so many different programs that are spread all over our headquarters. We combined all these programs into the Patriot Center," said General Steve Danner of the Missouri National Guard. In regards to the person in charge of the center, Danner said, "He answers directly to me and chief of staff instead of having each and every program and these little offices. And then you go up three or four levels before it even gets to the chief of staff much less to my office," said Danner.

"That's a great example of Missouri figuring out a better way to create the kinds of soldiers and airmen that are ready at any moment to do whatever they have to do to help Missourians in the national disaster or to help secure this country in a foreign war. Now we have to get them funded on regular basis," said McCaskill. The lack of funding was stressed several times during the discussion.

McCaskill has been a leader on sexual assault prevention in the military. In response to a recent sexual assault case at Aviano Air Base in Italy, the senator grilled military leaders in two Senate hearings. She recently backed legislation aimed at improving process for evaluating post-traumatic stress disorder disability claims by military veterans.

McCaskill won inclusion of provision in the 2012 and 2013 National Defense Authorization Acts designed to improve the military's response to sexual assaults and encourage the services to adopt training for sexual assault investigators developed at the Army's Military Police School at Ford Leonard Wood.

McCaskill introduced legislation that would curtail the authority of military commanders to dismiss jury convictions against sex offenders and require written justifications when sentences are lessened or commuted.