McCaskill says her upbringing in Missouri shaped her career 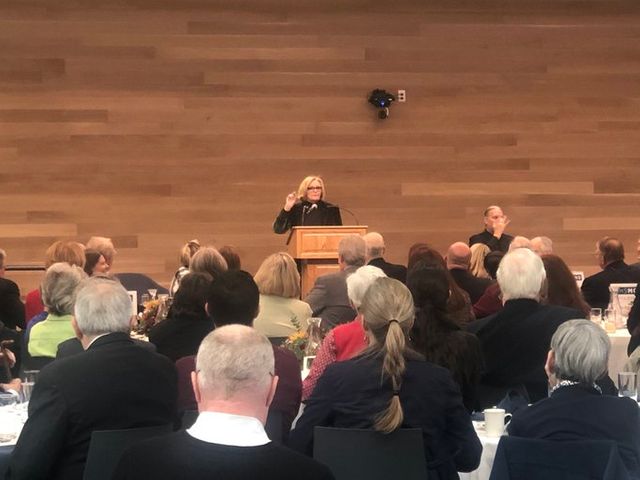 COLUMBIA - Former Democratic U.S. Senator Claire McCaskill spoke on Saturday at the Center for Missouri Studies about growing up in Missouri and how that played a role in her career.

She was the first speaker in The My Missouri Lecture series sponsored by the State Historical Society.

"It's always great to be home," McCaskill said.

The new lecture series will feature "prominent Missourians" to "reflect on what being a Missourian has meant to them as they speak about how the state's history, people and culture have shaped their experience," according to a news release from the State Historical Society of Missouri.

McCaskill grew up and developed her political career in Missouri. She has served as a Jackson County prosecutor, state auditor, state representative and most recently, a U.S. Senator for Missouri.

She said she admired her grandmother's hard work - a value she said all Missourians have. She said too many people focus on "differences that divide us."

"The biggest danger in our state today is the failure for us all to recognize our shared values," McCaskill said.

"We are literally where the country comes together," Blunt said. "We are an important state with an important heritage."

After the event, KOMU 8 News asked Blunt and McCaskill about the impeachment inquiry into President Donald Trump. This week, the U.S. House approved rules for taking the inquiry into the next phase.

"I think too many of the members of the House have already reached a conclusion, and now they're trying to find the information to support what they already believe happened," Blunt said.

McCaskill said she does not think any Senate Republicans would vote in favor of convicting the president. She said the next phase in the inquiry will be the first time the public can see the evidence and make their own opinion.

"The public will get to decide whether or not A they're telling the truth and whether or not B it's okay in America for the president to withhold military aid in return for political favors," McCaskill said.

McCaskill said she wants to see more people have conversations with people who have different opinions.

"We are still figuring out what the middle ground means today racially, religiously and economically," she said.

Although McCaskill lost her run for re-election in the Senate last year, she said she is happy to have more time to spend at home with her family and friends.

"I love this state," she said. "I love even the parts of the state that don't like me."