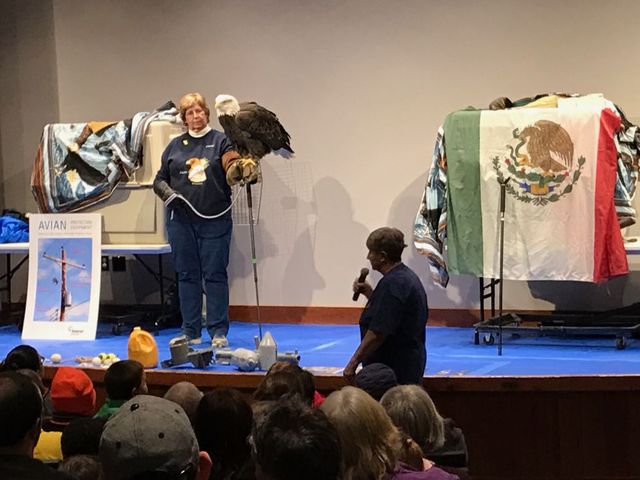 JEFFERSON CITY — Runge Nature Center hosted Eagle Adventure on Saturday, Jan. 28. Missouri Department of Conservation has eagle days from December through February and this is the seventh year an event has been hosted at the nature center.

Kathy Cavender, Runge Nature Center manager, said there has been a lot of effort from many different agencies to bring eagles to Missouri and help them thrive in the state.

In the 1990s, 74 eagles were brought into Missouri. According to a survey the Missouri Department of Conservation did last year, there were at least 284 eagle nests in the state.

Cavender said bald eagles in particular do well because Missouri has a lot of water and bald eagles are fishing eagles.

There were four presentations throughout the day showcasing a golden eagle and a bald eagle, brought in from Dickerson Park Zoo in Springfield.

Visitors learned about the eagles' stories in Missouri as well as some of their natural history.

There was a real eagle nest on display that had to be removed from the lake area by MoDOT for a highway project.

Visitors could also take a short trip to Missouri Department of Conservation's Marion Access on the Missouri River to see eagles in the wild through high powered scopes.

Cavender said, "the focus is to get people out when there's more eagle in the state and get them looking at eagle, seeing them in the wild as well as learning about them."