Memories Ingrained in the Hearnes Center 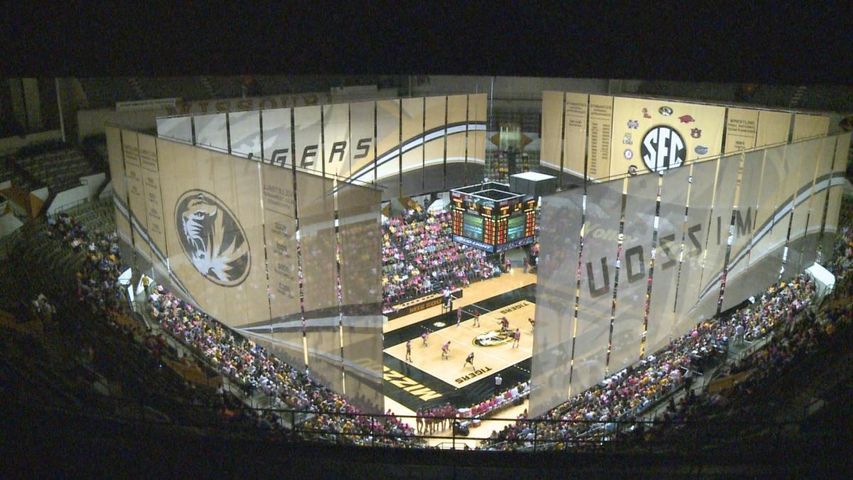 COLUMBIA - With talks of demolishing the Hearnes Center, many former coaches, players, and fans can't help but recall a few favorite basketball memories made in the 41-year-old building.

It's safe to say Mizzou athletics has had more success in this building than any other place on campus, being host to Mizzou basketball, volleyball, wrestling, and indoor track and field.

During the 32 seasons the men's basketball team took to the Hearnes Center to play, their record was 405-72.

Through the nine seasons men's basketball has played at Mizzou Arena, their record is 137-21.

Fourty-one years ago, on August 4, 1972, the Hearnes Center was opened, thanks to Governor Warren Hearnes. And at that time, it wasn't the easiest task to construct a building of that size.

"Certainly they take a lot of pride in the fact, especially Governor Hearnes to be able to navigate the legislative waters at that time to be able to put together a facility like that," University of Missouri Athletic Director Mike Alden said.

It took three years for the Tigers to pick up a title under Mizzou great Norm Stewart. In 1976, Stewart claimed his first Big Eight conference title with the help of his team.

Kim Anderson was a player during that season, and later coached under Stewart.

"The atmosphere was fantastic," she said, especially in big games that revved up the crowd. "You couldn't hear coach in the huddle, you couldn't hear anybody screaming at you, good or bad. It was just a tremendous atmosphere. You know that building just seemed to hold in that noise, you know it's hard to duplicate that. It really was a great experience."

The 1993-1994 season was another big milestone for Stewart. He coached his men to a 14-0 Big Eight conference record. The team made it to the Elite Eight, but lost to Arizona.

That season was full of surprises. The Tigers started out on the wrong foot, but were able to gel when conference play started. The Antlers, an organized group of rowdy fans, recall a few monumental games played at the Hearnes Center that year.

"Just the fact that you went 14-0 in conference just really sets it apart regardless of how it ended," Brian Grieb said.

"The Nebraska game is the Piatkowski game where he had a shot and to this day I swear it was half way down and it came back out, that would have blown the 14-0 season and everything and I still don't know how that shot didn't go down," Grieb said. "It was perfect."

Stewart coached for 32 seasons earning a record of 634 wins fro 1967 to 1999. Stewart claimed eight Big Eight Conference championships and six conference tournament tittles. But one thing that was certain during the 93-94 season was that with each big game played at Hearnes, the crowd played a bigger and bigger roll. Some credit the Hearnes Center as part of Stewart's success.

"When somebody obviously like Kansas came to town or Oklahoma, or Oklahoma State, a good conference rival, it got rather boisterous," said Antler John Martin. "It was not rare to look over to the decimal reader on the wall and see it regularly clicking over 120."

Grieb said "Anywhere from the lower level you could make your voice heard on the court and we knew that the players could hear us."

The Antlers claimed section A16 in the Hearnes Center, which sat on the court. They were able to make an impact on opponents at Hearnes because they sat close enough for players to hear them, until the group got pushed further back.

"Being in A16, just cheering for solid basketball teams, you know it's amazing that it's been 20 years since the 93-94 team," Grieb said.

Martin said, "A16 is one of those sections that slides in and out of the stadium and being mobile it's not really sturdy. So, if we were to grab the rail and start jumping up and down, this thunderous boom would start echoing across the Hearnes Center."

Fans who have watched games at Hearnes, as well as Mizzou Arena, can point out the differences between the two.

"The closeness of the crowd being on the floor, it just doesn't happen at Mizzou Arena, I don't feel that vibe," Martin said.

Fans say General Admission in the D section of the Hearnes Center was a key element in filling the building well before tipoffs.

"The true GA seating was a big bonus to having loud crowds and early crowds and I think that's the biggest difference between here and Mizzou Arena," Grieb said. "There it's become a lot more modern and you're lucky if you have most of the people there before the game tips off. Where as here you had that top level full you know an hour before the game because people had to get there to get their seats."

Some fans find it tough to think that, one day, the 41-year-old building may become a memory, just like the 93-94 season.

Aging Hearnes Center May Be Destined for Changes