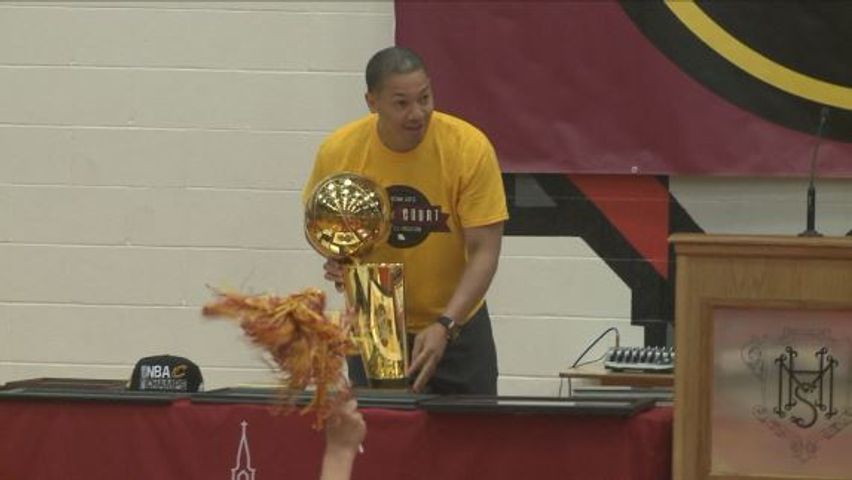 MEXICO - Tyronn Lue returned to his hometown of Mexico, Missouri - not just as a NBA champion, but a champion of Mexico.

“Just having the city of Mexico and all of the fans, friends and family being here to support this event was unbelievable," Lue said. "For them to be able to have something like this for me…it’s just so surreal and I’m very appreciative and very honored."

The idea of "Tyronn Lue Home Court Day" came on the night Lue gave a shoutout to Mexico during his postgame celebration.

"We wanted to make sure his hometown appreciated him," Audrain County presiding commissioner Steve Hobbs said. "Also after getting all of the attention from the national media, we thought it was important that we showed our appreciation for what he did for our community."

Organizers wanted to show appreciation for Lue not just on the basketball court, but in the community of Mexico.

"Tyronn has done a significant amount of things for this community. Most of them are unknown," Mexico resident Dan Erdel said. "His fireworks display every year is well known, but the way he reaches out to kids and makes sure they have clothing, or school supplies, or swimming lessons in the city pool, or just as an illustration of his care for this community."

Even outside of his service to the community, Mexico residents appreciates the way Lue serves as a role model to children in the area.

"You can see the kids in this community look up to him, and the rest of the community does. So we want to celebrate, really, 'Tyronn Lue,' not just the coach," Hobbs said.

The celebration of Lue included speeches from community figures, a performance from the Mexico youth choir and presentations of a honorary Mexico High School diploma and a key to the city.

"A lot of people had to do some things to make this thing possible, so there’s a lot of help from a lot of people, and I’m just very thankful for this opportunity," Lue said.

Even after the event, Lue gave back to the community by posing for photos with the Larry O'Brien Trophy and signing autographs for more than two-and-a-half hours.

"Well it’s just big for me, because I’ve been put in a position, blessed to be in a position where I can help people. I don’t have any kids, so I don’t have to support them, but my family comes first, my friends, and then the city of Mexico," Lue said.

"There’s nothing pretentious about Coach," Hobbs said. "We’ve known that for a long time and now the rest of the world is getting to understand what a fine young man he is."

When Lue returns to Cleveland to prepare for the upcoming season, he said he will continue to represent his hometown.