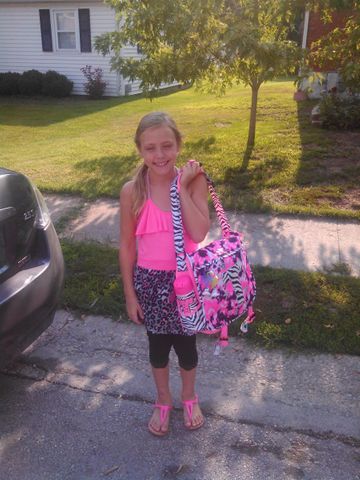 MEXICO - Pink hearts are now a common sight in the close-knit town of Mexico and it's all for a little girl named Taylor Carr.

Taylor, who just turned eight years old on September 15, was in a car accident October 28 that her family said left her with swelling on the brain and a broken neck.

Taylor's family said Taylor was in the front passenger seat with her mother, Mary Jo Carr, driving, and her little brother Kayler in the back seat.

They were driving down the gravel road by their home when Mary Jo said the driving on the road kicked up so much dust, she couldn't see another car coming at her head-on, causing the wreck.

Mary Jo ended up with a broken kneecap and wrist and Kayler was just a little scraped up, but Taylor sustained serious injuries due to whiplash, which culminated in her being flown out to the Women's and Children's Hospital in Columbia. Taylor's family said Taylor broke her C1 and C2 vertebrae at the top of her neck in the accident and sustained swelling on her brain.

"I knew we would need to do something to show our care for her," said Mrs. Ransom. "And hot pink, bright pink was a perfect color for her and when the kids came in Tuesday morning [October 29] I had the hearts ready, I told them what happened, and that wearing the hearts meant that we were caring about her showing our love for her even when we couldn't see her."

From there, the idea took off and soon pink hearts were popping up all over Mexico. Many local businesses painted their windows with giant pink hearts and well-wishes for Taylor, and others made T-shirts, awareness bracelets, and car decals.

Mrs. Ransom said she thought of pink since Taylor is known for her brightly-colored backpack.

"When you meet Taylor and you know Taylor, you know that it's got to be a bright color," said Mrs. Ransom with a smile. "And she is known in the classroom for this hot pink backpack and lunch box that she carries. If I could've done a rainbow heart I would've and so we picked one color and it was pink."

Another way the community has showed its support for Taylor is by collecting can tabs to donate to the Ronald McDonald House. Taylor started collecting the tabs when she was in kindergarten and never stopped.

Now that her family is staying in the Ronald McDonald House, the community has taken up where Taylor left off in tab-collecting.

"She's going to be in total shock when she sees the tabs everybody's collected for her," said Arnold.

To hear dad Dustin Carr talk about his daughter, it's easy to see why she received such an outpouring from her community.

"She loves music, and she plays soccer," said Carr. "Rides bikes, likes to ride her four-wheeler, she's very smart, lot's of energy. She had her own personality which was super. She's caring and cared about other people, she wasn't just about herself," said Carr.

Mary Jo, her mother, also chimed in and said Taylor loves music by Eminem and current pop stars like Katy Perry and One Direction and that if she doesn't go into the medical field like she had planned to, she might end up being a DJ.

Taylor's parents also said that after hearing about Taylor's love for music, radio DJs Cosmo and Whitney from Y107 have also been playing Katy Perry's song "Roar" every morning for Taylor, and also went to visit her in the hospital.

Mrs. Ransom said support like this and the hearts is uplifting to see.

"To just keep seeing the hearts appear, to have people ask me about her and to know that people are praying for her even when they don't know her, is amazing and it makes me proud to be from a small town," said Mrs. Ransom.