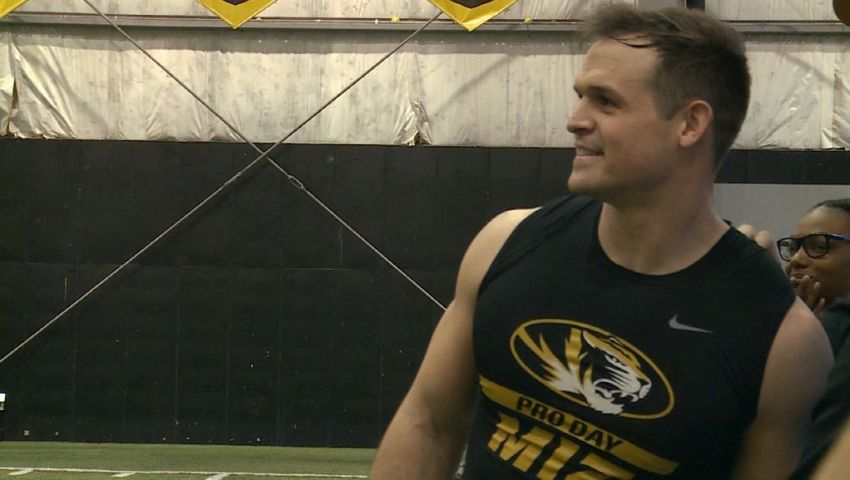 COLUMBIA - Missouri linebacker Michael Scherer has had an additional hurdle to jump through while he pursues his NFL dream.

The senior tore both his ACL and MCL against Middle Tennessee in 2016, effectively ending his season and his Missouri football career.

After getting leg surgery in November 2016, Scherer had his doubts about a future in the NFL.

“The uncertainty was tough for like two weeks and then I saw how fast I was getting better,” Scherer said.

Five months after surgery, Scherer was healthy enough to participate in Mizzou’s NFL Pro Day. Scherer had 26 reps on the bench press, a 34-inch vertical jump and a 10-foot broad jump. Those numbers would've placed Scherer in the top 15 among linebackers in the NFL Combine had he been invited to participate.

“Seeing him warm up and do what he possibly could, the entire team exploded when he did his vertical jump,” Harris said.

But Scherer wasn't able to fully participate in every test. He sat out of events such as the 40-yard dash and 3-cone drill because hasn't fully recovered from his injury.

“My leg’s kind of normal again. But my right leg, the bad one, hasn’t caught up to my left one yet. When you get to moving at a fast pace it can look kind of funny. I just don’t want to get hurt," Scherer said.

Despite the lingering injury, NFL teams are contacting Scherer about working out for them.

"I probably got a few workouts in this next month. They want to see me move around a little more,” Scherer said.

Scherer said his performance at Pro Day proves he’s ready for the NFL.