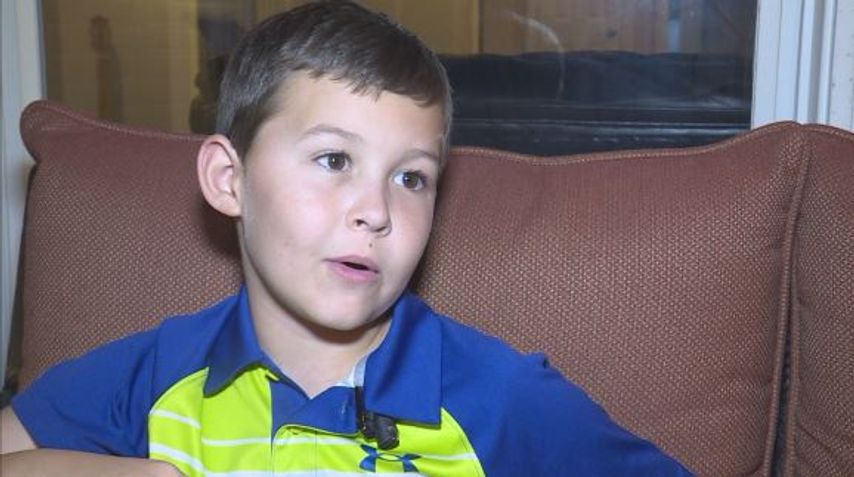 COLUMBIA- Nine-year-old Aidan Gilbert appears to have a number of reasons to be thankful. He comes from a loving family and tries his best to give back to others. But there's one thing Aidan has been passionate about for the last two years more than anything, and that's finding a cure for Duchenne Muscular Dystrophy (DMD).

Aidan and his father, Eric, first became involved with finding a cure for DMD after watching a CNN video of a mother, Jenn McNary, who has two sons with DMD. Only one of the boys qualified for a gene therapy trial.

"We just want to get rid of DMD," Aidan said.

According to the Muscular Dystrophy Association, DMD is a genetic disorder characterized by muscle degeneration and weakness. The disease primarily affects boys and is one of nine types of muscular dystrophy.

Although it's become more common for those with DMD to live into their 30s, there's currently no cure. In September, the Food and Drug Administration approved eteplirsen (Exondys 51), a drug used to slow the progression DMD.

Aidan's father, Eric Gilbert, said he tried to put himself in McNary's shoes.

"As a parent, I couldn't imagine what it would be like for one of my sons to have this treatment and the other son not to have it," Eric Gilbert said. "And that's basically what she had to wrestle with - one boy getting a lifesaving treatment, knowing that it's saving his life and the other boy didn't qualify for the trial."

From there, the Gilberts got involved by reaching out to families struggling with DMD. Aidan wrote letters to the FDA, called senators,visited the FDA in Washington D.C., where he became friends with those living with DMD, and created a Facebook page- Giving to Causes Greater Than Ourselves.

"I just was compelled to help other people that weren't as lucky or fortunate or blessed to have healthy children like I was," Eric Gilbert said.

One mid-Missouri doctor has shed light on the treatment and possible cure of DMD. Dr.Dongsheng Duan of MU Health found a cure for DMD in dogs.

"To treat this disease, you have to deliver your therapeutic gene to every muscle in the body, and that is a gigantic task," said Dr. Duan.

After successfully using a virus to treat Duchenne in dogs, Duan feels treatments, such as Exondys 51, are ready to for use in affected children with DMD.

Now that Exondys 51 is approved by the FDA, Aidan hopes to still keep pushing for the treatment and an eventual cure for DMD.

"We want to make it so every boy with Duchenne can have it - poor boys, rich people and everybody who has Duchenne just be able to have this drug and hopefully have a cure too that will just rid of the disease," Aidan said.