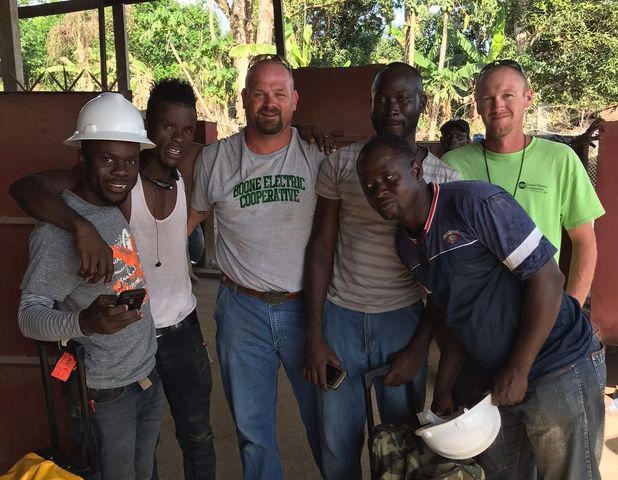 Before the project, people in Liberia relied on dry-cell batteries, candles and lanterns for light at night.

"The way we can just charge our phones whenever we need to, or flip on a light switch in the middle of the night, we really take it for granted," Wooden said.

"They won't have enough power for TVs, washers or dryers," Toalson said. "All it is is two plug-ins and a light bulb."

Along with two NRECA linemen from Bolivia, Wooden and Toalson showed locals how to run power lines and install utility poles. More than 19,000 feet of wire was used and 140 poles were put up.

"They've never built any kind of electric structure before, or hung any wire," Wooden said. "It was neat to teach them and see them get the hang of it."

Toalson said the project is solar-based, since Liberia is so close to the equator.

"The sun is a lot more powerful down there, so solar energy is more efficient," Toalson said.

A co-op from Texas is providing the solar panels that will be the finishing touch of the project.

The only other American the pair encountered in Africa was a Lutheran priest. The priest was skeptical of the electricity project.

"From his perspective, he's been there for 7 or 8 years, so I can see how he had his doubts," Wooden said. "He couldn't believe it, but it's happening."

Both of the Boone County linemen said the lack of easy access to water and electricity wasn't the most difficult part of the trip.

"I missed my family a ton," Toalson said. "After week two I was ready to head home and see my kids."

Luckily, the pair was able to talk to their wives and kids via the app WhatsApp, so long as the spotty Wi-Fi was cooperating.

Unfortunately, the duo won't be there when the lights finally come on.

"I think we created a friendship, cause they were sad to see us go," Toalson said.

Four-hundred families in Liberia will have power to light their homes once the project is complete. Toalson and Wooden are in touch with the linemen that will finish what they started.

Boone Electric Cooperative said it tries to send a few linemen on NRECA-sponsored trips like this one at least once per year.

NRECA has power projects designed to serve millions of people in more than 43 countries.