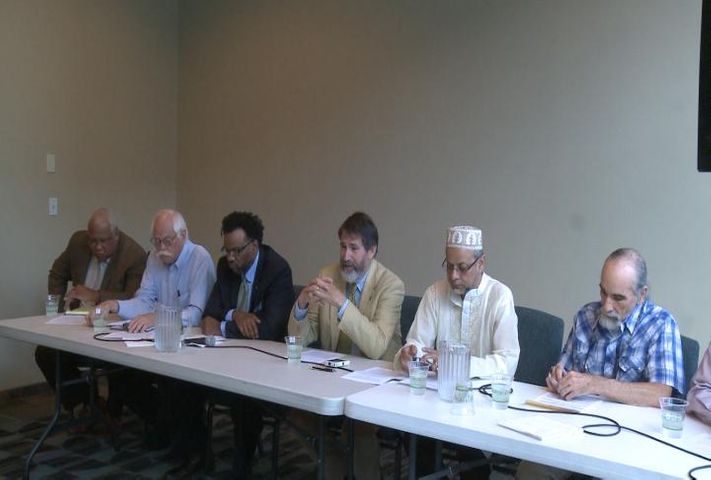 COLUMBIA - The Mid-Missouri Fellowship of Reconciliation held a news conference Monday with several local faith leaders calling for peace in Gaza and Israel. They also called for Israel to end its seven-year blockade of Gaza.

The group said the United States has some responsibility for the current conflict. They are urging the government to use its influence with Israel to put an immediate end to the violence and permanently end Israeli occupation of Palestinian territories.

More than 1,000 Palestinians, many of them civilians, and more than 40 Israeli soldiers have been killed in the 20 days since the assault began. The fighting has also resulted in several thousand wounded and extensive damage to homes and buildings in Gaza.

Despite truce pledges and ceasefire agreements from both sides, Israel has continued with its air and ground assault on Gaza.

Speakers at the news conference said the biggest issue with the ongoing conflict is the consistent violation of human rights. They said the Israeli assault on Gaza is a "war crime."

"We hope to be part of a movement in the United States to persuade our government to use its tremendous leverage over the country of Israel to pressure it to stop its practices of oppression and dispossession of the Palestinian people," said George Smith, an MU professor of biological science who has studied the Israeli-Palestinian conflict extensively.

Smith said the U.S. must pressure Israel because they have no means of putting pressure on Hamas, the political organization in charge in Gaza.

"We don't have leverage over Hamas, but we do have leverage over Israel and Israel is the main human rights abuser in this," Smith said. "Not that there aren't human rights abuses by Hamas and other players, but Israel is the main one. Most of the deaths by far are Palestinians that have died from Israeli attacks. The Israeli attacks are not justified. Some deaths can be justified as not abuses of human rights, but these are not among them."

Rashed Nizam, the leader of the Islamic Center of Central Missouri, spoke about the state of the people in the combat zone.

"The people say, 'it is better to die for something than to live for nothing.' Look at how hopeless they are," Nizam said. "Don't we have a responsibility to react to this, to show our support to tell our own government our own people, what's going on? You can't close your eyes and ignore everything."

Nizam said that the conflict in Gaza affects everyone, not just the Israelis and Palestinians.

"The Quran says, 'any Muslim people killing one person is killing their entire humanity.' So anybody doing that there is killing all of us," Nizam said. "We all are responsible. We pretend to not feel it but we are. This is a violation against all of us."

The speakers also included Mark Haim, the director of Mid-Missouri Peaceworks and a Jewish-American,and Rev. C.W. Dawson, Jr., the president of Dawson Journeys Ministry and a senior minister of 35 years, among others.