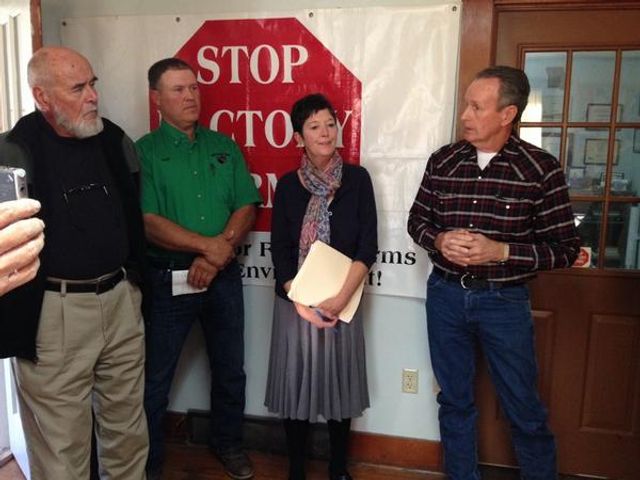 COLUMBIA - Local farmers and Callaway County residents met at the Missouri Rural Crisis Center to talk about concerns regarding an Iowa based company bringing a proposed hog farm to Mid-Missouri.

The proposed new concentrated animal feeding operation would be near the existing CAFO where 10,000 gallons of hog manure recently spilled into Millers Creek. The Missouri Department of Natural Resources is currently investigating the spill.

Callaway County resident Margot McMillen lives near the CAFO and said the smell and smoke from burning pig carcasses is unbearable. She has a farm and said when one of her animals die, she buries it or has someone haul it off, but she would never burn a carcass.

In July, a neighborhood group fighting the proposed three building hog facility, "Friends of Responsible Agriculture," gave county commissioners Randy Kleindienst and Donald Kritzer a petition with 1,371 signatures in an attempt to stop the CAFO from coming to Mid-Missouri.

McMillen and other residents near the proposed site said they are worried another hog farm would cause a decline in property values, more smells and contaminate water.

Eichelberger Farms has not returned multiple phone calls made by KOMU 8 for this story.

Darren and Gary Horstmeier own the land being sold to Eichelberger farms.

McMillen said she has had a good relationship with them in the past, but their willingness to allow another CAFO is taking it too far.