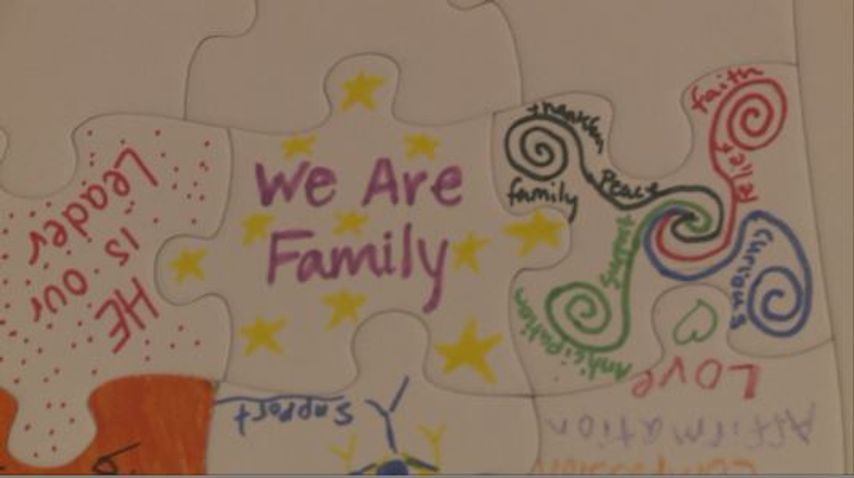 HARRISBURG - A warm bed, a hot meal, and hugs from a loving family member are common enough memories for a lot of children. But for many of America's foster children, regular childhood moments and milestones are overshadowed by situations outside of their control.

Coyote Hill Christian Children's Home is a home for abused and neglected children and is the only licensed children's home in mid-Missouri. Although Coyote Hill receives a majority of their placements and a small percentage of its budget from the state, a majority of the money they need to run is gained through fundraisers and donations, which Myers oversees.

"Eighty percent means that a lot of what I do is meet with donors, figure out ways that we're going to raise the money to support the children," she said.

As a hybrid between a traditional foster home and a residential facility, Coyote Hill has four different homes where the children live and stay. During their time at Coyote Hill, children are cared for by Home Parents, couples whose main job it is to raise the children.

"Their job is to make sure the children are being cared for and when you have that large of a family we want them to be available at any time," Myers said.

Myers' own dedication to helping Missouri's foster care system didn't start with her work at Coyote Hill. Instead her passion was awakened after she adopted her daughter, Elise, from Ethiopia, something she says changed her life.

"I adopted a little girl from Ethiopia about five years ago and in that process we realized that there's a huge need domestically for caring for children who are displaced from their families," Myers said.

She and her husband have two biological sons, but knew they always wanted to adopt.

"It's just something that we've know we wanted to do," she said. "We know that there's millions of orphans in the world who need parents and we wanted to make one less orphan."

Before the adoption, Myers was pursuing a career in worship arts, bringing the creative arts to different worship services. She also worked a number of management jobs.

It was in going through the adoption process she realized how much support families who care for foster children need. As a result, this led her to become involved in foster care agencies, including Coyote Hill.

"There's loads of paperwork you have to go through. International adoption has some differences to domestic adoption. When you're adopting internationally, there are lots of regulations and paperwork in many more hands that paperwork has to go through."

Although the typical wait time is around three years, it took Myers and her husband 18 months to adopt their daughter. Despite experiencing a faster-than-usual wait, Myers said it wasn't any less difficult.

"It's hard on your heart because you're excited and then you get through one section of paperwork and in the midst you might be raising money," Myers said. "And then you might get all of that paperwork done and then you maybe waiting to be placed with a child. So that's hard, and then you have to wait to get you're child."

Now several years since adopting her daughter and eight months since starting at Coyote Hill, Myers is more than ever familiar the difficulties that comes with raising a foster child.

"It's challenging anytime that you're working with anyone that's had a lot of trauma," Myers said. "And all children who are in the foster system have experienced trauma. And so knowing how to communicate with them and best care for them and be able to break down some of those walls to let them know that they are loved and they are precious and that they deserve to be cared for is a constant challenge."

"There's over 13,000 children in need in foster care in Missouri and if you look at Boone County alone there's over 300," Myers said. "That's a huge amount of children that aren't with their family. They're not with their parents and so they need someone to come along side of them and love them and give them a home."

In order to address this issue, Coyote Hill is building another facility on its ground. Myers says as it is, the organization has to turn away about one placement a day simply due to its limited resources. Named after a past donor, the new Petersheim Home will increase the number of children Coyote Hill can house to over 40.

With the changes coming to Coyote Hill, in the future, Myers said people can get the wrong idea about what the children are going through.

"We're out in the country and we have an equine therapy program with eighteen horses and we have ponds and fishing," Myers said. "But you can look at all that and think 'oh how wonderful, what a wonderful thing for children,' and it is wonderful but what I think what people forget initially is that these children have come from very, very difficult situations and miss their parents no matter what the situation."

Other Missourians have differing opinions on adoption and foster care. Annette Driver, a lobbyist in Jefferson who chose to give her daughter up for adoption, thinks it's not for everyone.

"It's great when it's successful and people can be connected with a child and it works out and they grow in a healthy way," Driver said. "But I will say that where there's trauma and an unnatural side to it, that many times, depending on the disposition of that person's DNA, they may or may not be a good fit for adoption."

Driver says she became pregnant with her daughter when she was 18 or 19 years old and decided to have an open adoption.

"I went to a maternity home, did everything under the cloak of secrecy," Driver said. "It was quite draining, You almost had to step outside yourself to go through that experience. And then after you had your child, in my case I chose to have contact and spend time and I started to bond with my child."

Decades later, Driver has tried to maintain some contact with her daughter. She said not raising her daughter highly affected her life.

"I would never suggest someone do that if they could."

Driver's said more could have been done to help her make her decision.

"When I went to the maternity home, I went through all kinds of group counseling," Driver said "But what I didn't understand, it was more to help you understand why you were doing what you were doing and being okay with it, than to actually question you and help you go deep in understanding this is going to be a life-long decision that you're making and some of the things you didn't think of long-term of how that was going to affect you 10 years, 15, 20 years from then, how you might possibly feel."

Although, Driver and her daughter aren't currently speaking, Driver believes she would have been the best parent for her.

"Nobody could have given her a better life than I could have," Driver said. "But then there is instances where a mother has a child and keeps the child and never connects with the child. And that person then grows up feeling something is missing even though they've been with their biological parent the entire time. And they grow up with issues and another sense of trauma. Those are perfect candidates to be raised by another set of parents who lack, for whatever reason, can't have their own and want to give a good, nurturing home."

For Myers, the foster care and adoption system in Missouri could use some work.

"It's not a perfect system, by any means and I think it's important to have our officials and our leader's in government knowing and being aware of the foster system, the good things and the things that need to be improved upon," Myers said.

Myers said she's glad to see Missouri First Lady Sheena Greitens' dedication to fixing the foster care system for the future. For her, everyone has the opportunity to make a difference in these children's lives. She says although not everyone can be foster or adopt a child, people shouldn't be hesitant to help in whatever way they can.

"It takes a community to care for the children. It is not just one parent's job. The children, I think they're in our community and they're our responsibility, and the parents need supports and the children need supports. And so there are many, many ways that you can support foster and adoptive children without being a foster or adoptive parent."