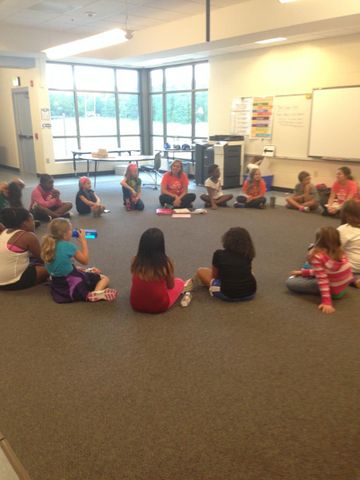 COLUMBIA - Twenty girls and their coaches are training for a 5K in a program built to "to inspire girls to be joyful, healthy, and confident"

These runners will train twice a week for ten weeks taking in the things they've learned in order to cross a finishline and fufill a goal.

"I see kids everyday who are struggling with things that are outside of their control, things that are going on outside of school or inside of school that affect how they see themselves or how they get along with others. Sometimes they can feel very defeated by those things," Counselor Anita Ellis said. "Just to see them gain in their confidence and the best part is at the end, we all will cross that finish line at that 5k, no matter how long it takes us to do it, when they do that in November its priceless."

Heart of Missouri Girls on the Run started their fall season September 8th and works as a local resource for young girls facing difficult situations.

"Our ten week curriculum features a lot of topics for girls including positive self talk, addressing bullies, awareness of media messages, and throughout the 10 weeks we train our bodies physically and emotionally to complete a 5K," Director Sara Loveless said.

The program utilizes coaches ranging from college-aged women to school faculty members who teach the lessons and run along side the girls. The number of girls per program is capped at 20 to allow the coaches one on one mentoring time with each of the girls.

Former Coach Lauren Bridgewater remembered when she helped a girl she felt needed extra attention. She explained how one of her runners had been completely defiant since the start of the season. She would not follow directions, she said inappropriate things, and she was rude to the other girls in the program. One afternoon after the runner had an explosive tantrum Bridgewater took her outside to talk one on one.

Once she was away from the group she broke down and told Bridgewater she was being bullied at school, had problems at home, and confessed she didn't like herself. Bridgewater was able to mentor her and introduce her to resources within the school. She said by the end of the season her runner had completely turned around. Bridgewater said she thinks its hard for children to recognize poor mental health.

"I don't think people pay attention to it as much because they can't communicate it as well. They don't know how," Bridgewater said. "They sometimes forget and go play. But still in the back of their minds have some problems going on. They're better at hiding it because they have less responsibilities. You can't see them struggling to get things done but really there is a struggle."

At the beginning of a Girls on the Run practice, the girls meet in a classroom setting, sitting cross legged, in a circle, surrounded by friends and coaches giving them support. The coaches teach lessons, the girls discuss them, they all stretch, and then hit the pavement to practice running.

The 127 page curriculum Girls on the Run incorporates focuses on 6 core values:

• Recognize our power and responsibility to be intentional in our decision making
• Embrace our differences and find strength in our connectedness
• Express joy, optimism and gratitude through our words, thoughts and actions
• Nurture our physical, emotional and spiritual health
• Lead with an open heart and assume positive intent
• Stand up for ourselves and others

Board members want the girls to take the lessons they learn during this time and apply them to their everyday experiences. Girls on the run works to improve mental health by recognizing and eliminating bullies.

"Mental health can a lot of time be something that's shameful or swept under the rug and I would like to see that change just in general but for kids bullying starts as soon as they meet other children," Board Chair Jennifer Coffman said. "Other problems at home, or problems with relatives, or problems with teachers that all happens just as soon as they are put in a social situation. We have to equip our children. They need to know how to deal with bullies. They also need to know what a bully looks like, they might be being a bully and not even realize it."

Mid Missouri girls in the program will accomplish their goal on Stankowski Field November 15th.

There are 10 sites in Columbia where elementary girls can get involved to view those click here.