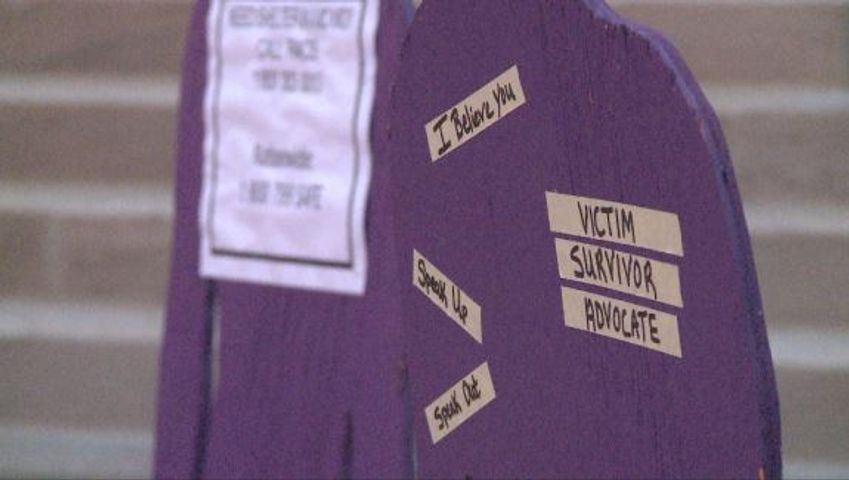 JEFFERSON CITY – The Capital Area Missouri chapter for the National Organization for Women held a remembrance vigil for victims of domestic violence at the Missouri State Capital on Sunday.

Jeannie Lahman, President for the local NOW chapter, shared her own story as a survivor of domestic abuse and promoted support for other victims.

“We’re here are we believe you and we want to help you,” Lahman said. “You can come to me. I’m your ally, and I promise I will get you to someone who will help you.”

Lahman had a purple ribbon on her shirt with the name of her grandmother who was also a victim of domestic violence.

Missouri had over 44,000 reported cases of domestic violence in 2016, according to the Missouri State Highway Patrol. The number of cases is nearly identical in 2015 but only about 40,000 cases were reported in 2014.

Alden Henrickson, Executive Director for Rape and Abuse Crisis Service in Jefferson City, said its 36-room shelter had over 7,000 overnight stays in 2016, meaning it was just over half-full on average. In 2015, the shelter was about two-thirds full per night, Henrickson said.

Henrickson says it is hard to say why the shelter had less stays last year.

“It’s sometimes tied in with the economy,” Henrickson said. “It’s tied in with the weather and things like that. Some years, we’ve been very full right before school starts. Other years, it seems like after school starts for kids, that’s when we tend to start building back up on the number of people staying at the shelter.”

Lahman said people need to elect officials at all levels of government who are pro-women and support the needs to domestic violence victims.

If you or someone you know experiences domestic violence, there are several resources available 24/7 statewide or call the National Domestic Violence Hotline at 1-800-799-7233.