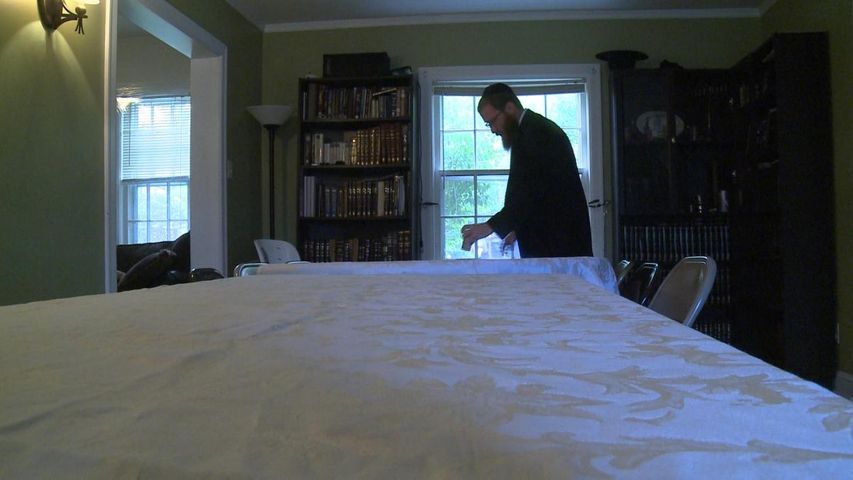 COLUMBIA - Mid-Missourians are using challah and matzoh ball soup to show their resilience. The congregation of the Chabad of MU and Mid-Missouri met for their first Shabbat dinner Friday night since two cases of anti-semitic vandalism were discovered in a MU residence hall.

The Chabad's rabbi, Avraham Lapine, said it's crucial to show the community their spirit.

"I've mentioned this to a number of students and I've said it over and over again - the Jewish attitude is that we don't get intimidated," Lapine said. "You try and scare us? We'll be even more Jewish."

On Thursday, April 9, and Friday, April 10, graffiti containing swastikas and threatening language was found on the ground floor of a stairwell in the Mark Twain residence hall. According to a news release from Students Supporting Israel, the first incident included ash drawings of the Illuminati symbol and the word "heil." The next day, a second incident was reported. A swastika and the words "you've been warned" was on the same wall. This occurred during the last days of Passover.

"I was shocked and surprised, and it was heartbreaking, obviously, that such an incident happened at Mizzou," Lapine said. "In my four years of living here, there hasn't been any anti-semitism like that. "

Coincedentally, the meal took place a day after the 72nd anniversary of Holocaust Remembrance Day. It is marked by the 27th day of Nisan in the Jewish calendar, when the Warsaw Ghetto uprising began in 1943. It is a reminder of the 6 million Jews and 5 million others who were systematically slaughtered by the Nazis. On April 19, 1943, the Warsaw Ghetto uprising began.

The Jewish Virtual Library estimates that there are roughly 59,175 Jews living in Missouri, which is 0.9 percent of the state's total population. According to the St. Louis Jewish Light, there are about 750 Jewish students at MU as of 2011.

MU Chancellor R. Bowen Loftin was critized Friday by a series of watchdog groups for his slow response to the matter.

"We are concerned that several days had gone by before you spoke out publicly on the matter, causing some Jewish students to feel marginalized and ignored," the 16 organizations said in the letter.

Loftin released a response Thursday, saying in part "As I have said many times and in many contexts, the safety and security of all University of Missouri students is our top priority."

Regardless, Lapine stressed the importance of not reacting violently.

However, Lapine said if anyone is concerned, he is always willing to listen.

"We just want to let the Jewish community know that we are there for them, if they need any support, anyone to talk to, our doors are always open."