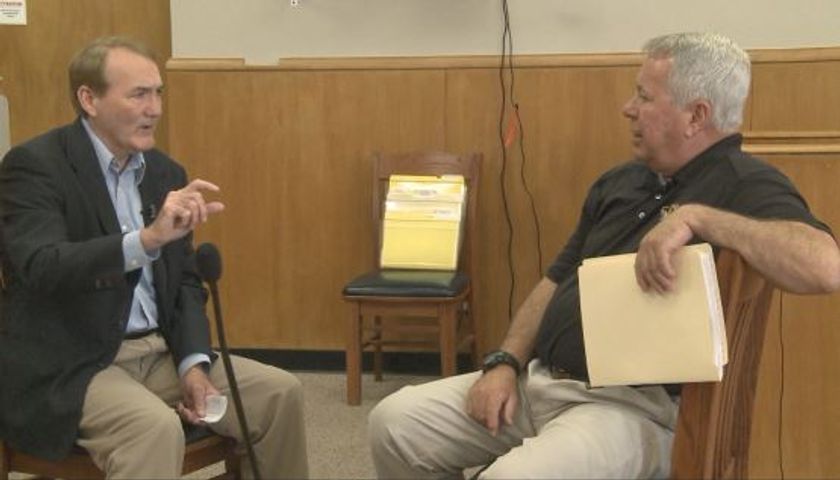 FERGUSON - Nearly a year after the police shooting of Michael Brown and the following riots, Ferguson remains in the national spotlight. What many here probably don't know is the Missouri Supreme Court appointed a mid-Missouri judge to restore integrity in Ferguson.

Roy Richter is a Missouri Eastern District Court of Appeals judge. He lives in Montgomery City where he sat on the bench for more than 27 years.

Judges don't normally do interviews, but Richter sat down for an exclusive interview with KOMU 8 anchor Jim Riek, after Richter spent the past two months in Ferguson.

Here is an excerpted transcript of part one of Riek's interview with Richter:

Riek: Were any of the defendants in your courtroom there... because of the protesting?

Judge: Oh yeah. Several. The one day I had trials, both of those trials involved people who had been involved in protest activity. One gentleman was upset because he'd never been charged with protesting. And I explained to him, protesting isn't illegal, you get charged with trespassing because Walmart didn't want you in their parking lot. You were told to leave and you refused to do that.

Riek: So there is a difference in Missouri between protesting and trespassing?

Judge: There's nothing...you're allowed to protest. But when the property owner says - and they called the police and said 'We don't want these people in our parking lot. They're interfering with our patrons. We want them to move somewhere else', and they were told that, and refused to do that.

Riek: The media swarmed on Ferguson.

Judge: Yes they did.

Riek: What were some of the mistakes made by reporters?

Judge: I think the over coverage.We all know how people like to play to a camera. All you have to do is go to a sporting event. I'm sure any time that you're being interviewed on camera at a Mizzou game, there's going to be people in back of you...

Judge: Right. And I'm afraid that a lot of that misbehavior in Ferguson was encouraged by the presence of TV news cameras.

Riek: By the time you arrived, was there negative perception about what you were there for?

Judge: I don't think there's a perception about why I was there. The media was all over that first night of court and wanted to be in the court room and we had to explain to them that under Supreme Court rules, we cannot allow unrepresented defendants - which is 99 percent of them - and I mean, in any municipal court, to be photographed or recorded in any way. The solution to try to satisfy the media was that the office of state courts got the camera in myf ace that showed only and a microphone that would pick up on my voice and that feed was sent to the police station/municipal court building where apparently my visage was plastered on a big screen television. And after watching me for an hour and a half, the media has not been back.

Riek: Because you don't like video in your court room.

Judge: Well it's not a function of not liking, I can't allow it when there's unrepresented defendants. I mean, the courts are open, anyone can come in and watch, but, you know, the people who are appearing, especially people who are not represented, have the right to their privacy too.

Part Two of Riek's interview with Richter will air on KOMU 8 News at 10:00.